Finally nominated for an Oscar, Willem Dafoe plays Vincent van Gogh in Julian Schnabel's At Eternity's Gate – but unfortunately the rest of the picture doesn't hold up

Willem Dafoe was nominated for an Academy Award for his lead performance as Vincent Van Gogh.

As brilliantly disorienting as the work and story of Dutch painter Vincent Van Gogh still is, the latest biopic takes no new precautions to fit his memory into a digestible box. Painter-turned-filmmaker Julian Schnabel blurs the lines of truth and tale, as he crafts an immersive picture focusing on the brusque final years of the artist. But immersion here begets motion sickness, as the director favours sporadic and impulsive moments in the place of fluid storytelling.

The film is punctuated by abrupt silences – both visual and sonic – that interrupt every next activity for Van Gogh. Whether he’s trekking through fields of wheat to ‘find a new light’ or swapping philosophies with fellow artist Paul Gauguin (a terrifically dubbed and moustachioed Oscar Isaac) in Paris, the narrative thread is often snapped short. Life is slipping away from Van Gogh, and so drama is taken away from his onlooking audience as well.

Van Gogh’s unravelling mind is coloured by his material inspirations in the film. Fields of dead, sparse sunflowers push a need to create his own, ones that will survive eternity. His friends – Gauguin, Ginoux, Gachet – sit like muses, and come to life under the thick strokes at the end of his brush. Conversations are filmed invasively and unevenly, clouding vision and confusing the words being spoken.

Our portrait is designed around Dafoe – the Oscar-nominated actor shoulders the painter’s burden like an all-knowing mausoleum of affliction. The growling timbre of his voice opposes the quiver of a febrile lip, the slant of pained eyes and the gasp of urgent tears. He gives a masterfully piercing performance, but one that is too often interrupted by an alienating world.

It feels like Schnabel is one step sideways from his audience. Not ahead, as surprises seldom feel satisfactory, but clearly not behind either, as intelligence still outweighs ignorance. An introspective account, one that offers little on where it’s been or how it could possibly move forward, seems like a fitting understanding of Van Gogh – but it’s maybe one that would only be relished by the singularly impassioned man himself. 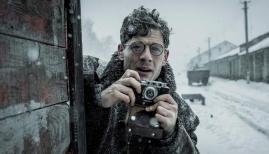