This hinterland of all-you-can eat restaurants and theme park resorts is seen through the eyes of Moonee (Brooklynn Prince), a hyperactive six-year old who lives with her extremely young mother, Hailey, in the ‘Magic Castle’ — the genuine name of the extended-stay motel they call home.

TRY CULTURE WHISPER
Receive free tickets & insider tips to unlock the best of London — direct to your inbox
Like Moonee, the film finds fun in even the darkest corners of this building and delights in encountering its bizarre collection of residents; a motley hoard kept in check by its avuncular manager played by an unusually soft-centred Willem Dafoe.

Painted in a sort of candied purple that you only find in Florida, this motel might appear sugary-sweet on the surface. But for all its eccentricities, it is hard to turn a blind eye to the troubled lives of the people who inhabit it: working menial jobs (if they can find them), relying on welfare, food handouts and, often, drugs to get through the week.

Hailey — brought to life by a formidable performance from newcomer Bria Vinaite — is certainly no different, having to come up with inventive ways to make rent. Unfortunately, though, her other talent for both making friends and alienating people lands her in serious trouble towards the end.

In the film's poignant final act we are really hit with the cold reality of the extent she has gone to, and is willing to go to, in order to support herself and her child. Likewise, whilst Moonee’s steady stream of wisecracks and expletives are incredibly funny, they are also a reminder that this girl has had to grow up far too quickly. 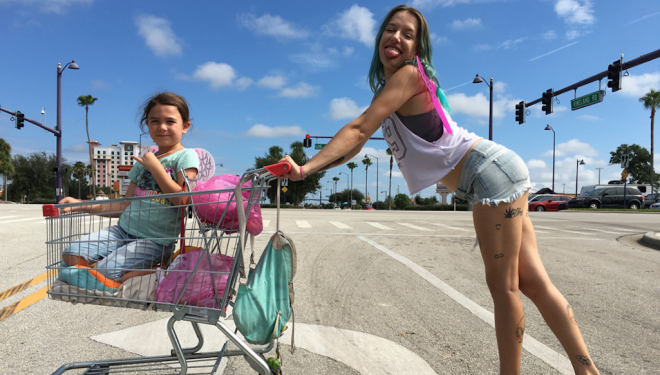 The Florida Project is the latest work from Sean Baker, who rose to prominence and wide acclaim for 2015’s Tangerine: a comedy shot exclusively on iPhones about a transgender sex worker.

While the story itself could stand to be a little tighter, this film proves Baker’s talent and sensitivity again by sustaining this double vision of a world sweetened by hope and imagination yet soured by socioeconomic desperation.

Like the strange fantasy corner of the state it is set in, The Florida Project is both unreal and all-too-real at the same time.