Paddington 2 is not just one of the best family films this season, but simply one of the very best releases of 2017

There are bits in Paddington 2 which recall The Shawshank Redemption, It’s A Wonderful Life and Indiana Jones and you could make a case for it being better than all of them.

Ok, that’s perhaps a step too far. But it’s hard not to be effusive about this disarmingly enjoyable film which is genuinely able to live up to that promotional cliche of ‘fun for all the family’.

The story is simple enough — Paddington Bear must clear his name after he’s framed for the burglary of an antique shop containing a curiously expensive pop-up book which he wants to buy for his Aunt Lucy.

Where a lesser film may have tried to tug on our heartstrings more by playing up Paddington’s loneliness behind bars or having his own family doubt his innocence, Paul King takes care to ensure that it never loses its sense of unbridled wholesome fun even in more poignant sequences.

It's just as well, as there are few things more tedious than a family film which is mired in a needlessly convoluted plot or gloominess.

No such problems here; younger kids will lap up the array of expertly devised slapstick and pulsating action sequences that take our marmalade munching protagonist through the bowels of a prison, atop a speeding train and the bottom of a lake.

But it’s older viewers with an eagle-eye for detail (and an attention span a little longer a giddy five year old riding a pick n mix sugar rush) who will really get the most out of a film that’s packed full of whimsical visual gags, Shakespeare references and punchlines that land impeccably over an hour after they’re set up.

And that’s before we get to Hugh Grant’s absurdly entertaining performance as the villain Phoenix Buchanan — the man who frames Paddington and steals the pop-up book in which clues about hidden treasures lie within. For those too young to know or care much about Grant, his turn as the dastardly bad guy more than does the job.

But the rest of us can relish the depths of this meta-performance which sees the former heartthrob play a vain, washed-up luvvie actor looking for a return to the limelight. A particular scene where we see Grant’s ham it up in a denigrating dog food advert dressed as a spaniel is guaranteed to get a big laugh at every screening. 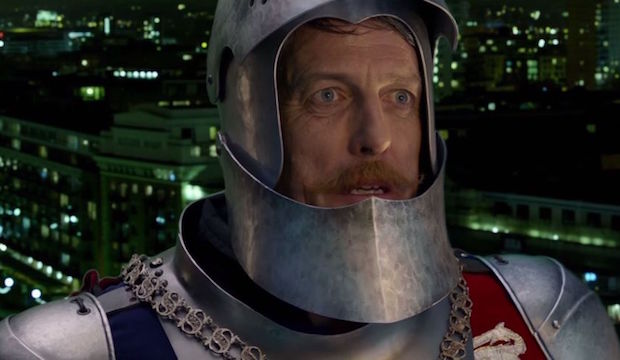 It’s great to see that Grant is clearly having a blast in this camp, self-parodying role. But so does the rest of the cast, most of whom— including Hugh Bonneville, Sally Hawkins and Peter Capaldi — return from the first instalment. Brendan Gleeson is the other notable newcomer, playing a gruff but well-intentioned prison chef called Knuckles who takes a shine to Paddington after he introduces him to the wonders of marmalade and good manners.

All the supporting cast give warm, fully-committed performances that don’t ever feel like they’ve been dumbed down for younger, less critically discerning viewers.

But the real star is of course Paddington himself. Ben Whishaw’s accomplished vocals coupled with convincing CGI makes us completely forget that we're watching a computer generated entity and not an actual, real-life anthropomorphic bear.