Professor Marston and the Wonder Women gives an entertaining account of the life of creator of Wonder Woman, and the lovers who influenced him

Angela Robinson’s new film is in some way, however, a Wonder Woman origin story. It follows the life of the creator of the bikini-clad superhero, Harvard psychology lecturer William Marston, and the lovers who inspired him to develop the character.

This feature has clearly been marketed in such a way so as to play up its affiliation with the widely successful Wonder Woman film from earlier this year. After all an earnest drama about the inner-workings of polyamorous relationship between academics is not a particularly easy sell to a mass audience.

But neither were the original Wonder Woman comic books. As we learn, the early editions of the series were filled with explicit — in both senses of the word — messages about gender equality and the pleasures of submission and domination. Wonder Woman’s trademark lasso, we learn, is not a hangover from the days of Westerns, but in fact a nod to Marston’s interest in bondage.

The lurid nature of the first incarnations of Marston’s comics brought him before a censorship tribunal who claimed that his free attitude to sex and promotion of women’s liberation threatened to pollute young readers minds.

The film begins with, and is punctuated by, scenes in which the urbane Marston (Luke Evans) attempts to defend his works at a hearing in 1945, explaining all the socio-political and psycho-sexual ideologies which motivated him to create the comics.

We’re then taken back to 1928 when Marston is married to Elizabeth (Rebecca Hall), a fiercely intelligent woman with whom he collaborates on all of his experiments. It doesn’t take long though before he becomes infatuated with a doe-eyed student (Bella Heathcote).
So far, so conventional. But after Marston hires Olive to work as his research assistant, it soon transpires that Elizabeth has become besotted with her. And conveniently enough Olive discovers that she feels the same way about both of them.

It’s a shame this sequence is laughably bad because the film’s approach to their love-triangle is largely imbued with a sensitivity and sensuality. Robinson succeeds in making us believe in their stability and legitimacy of their triad relationship and avoids indulging in the salaciousness of the narrative. 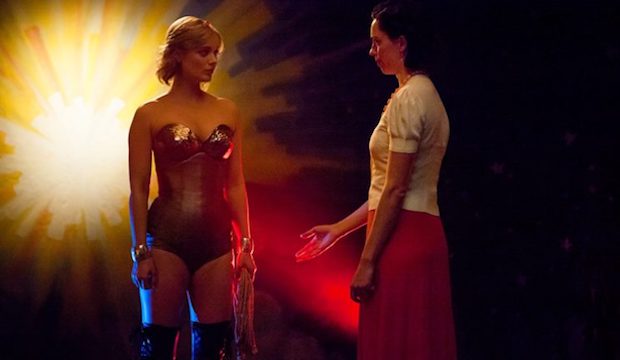 The three leads all accentuate their characters’ natural charisma, humorous candour and sincere belief in their love. It’s Hall who deserves most the plaudits as a conflicted woman who yearns for subversive sexual freedom while resenting her status as an outsider in a conservative society.

But what is a very watchable, if not particularly subtle film, is almost undone by a problematic ending which threatens to undermine its core message about the female struggle to reclaim their agency.

The final scenes perplexingly play out in such a way that makes it seem like Marston is the one who facilitates his lovers’ long-term happiness. Surely these wonder women are more than capable of being able to do that themselves?