Wonder Woman is in awe of its superhero protagonist, but that's not the same thing as coming up with decent lines for her

1 CW reader is interested
Wonder Woman film review 2 Wonder Woman film review Matthew Robinson
Hey, did you know? Gal Gadot is beautiful! Like really really beautiful. Her face is this amazing oval that abides by established laws of mathematical perfection. Her body – oh man, her body – is super long and tanned and athletic, and her hair always seems to float out behind her, like there’s a fan pointing at her perfect oval face. Yep, Gadot is pretty much the acme of anatomical wondrousness. Physically, she is a literal ‘wonder woman’!

The film? The film is… whatever. But Gal Gadot!

Time to be serious. There’s nothing wrong with Wonder Woman being beautiful. But what else is she? Please – watch Wonder Woman (as sociological research, if you like) and tell us something about its titular character. Tell us anything! Ok, we’ll tell you: Wonder Woman is… confused. By the end of the film, she is less confused. That is about as much character development as you’ll get.

It’s not Gadot’s fault. In other films she’s capable of making passably funny lines funnier with a perfectly raised eyebrow. In Wonder Woman she has no funny lines, but Gadot raises her eyebrow anyway, as if still expecting her part to have been written with more wit. But Wonder Woman is not Wonder Woman’s subject. She is its object.

Princess Diana (as WW is known) has grown up on the mystical island of Themyscira in the matriarchal – indeed, exclusively female – society of the Amazons, a race of perpetually armour-clad superhumans created by the Greek gods. Diana dreams of becoming a warrior trained by her aunt General Antiope, but her mother (Queen Hippolyta) is too protective. There are intimations that Diana’s destiny involves great things, however, and events are set in motion when a suave first world war spy (Chris Pine) crashes his plane on to Themysciran shores.

Pine’s Steve Trevor is being pursued by a large contingent of the Imperial Army, and a German-Amazon clash on the beach is a wake-up call to Diana, who realises that the world beyond her island is in peril. She accompanies Trevor to London and then to the front lines, determined to do away with Ares, God of War, whom she imagines is the one responsible for the global conflict. 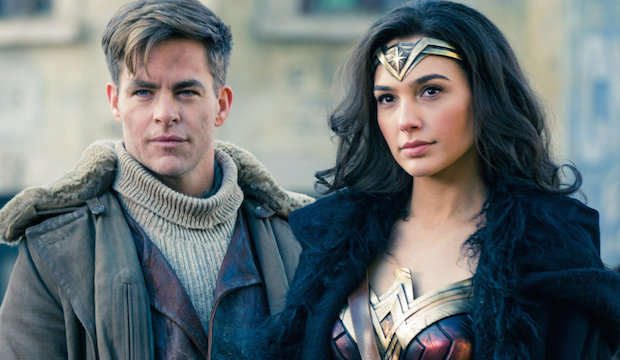 The action sequences are muddy, flat and without tension or consequence; cinematographically, Wonder Woman is the ugliest film that money can buy. There’s also some murkiness about who the enemy actually is: they look and sound like traditional movie Nazis, experimenting on captives and shooting their subordinates for minor transgressions and being generally intent on some kind of mad domination. The troubling implication is that conscripts of 1918 are on a par with the SS, and that all Germans are deserving of violent punishment.

The less special effects-heavy scenes are better. They chart Diana’s fish-out-of-water progress through a sexist world not ready for her stridency and power, and there are some genuinely funny moments. Unfortunately, these are all courtesy of Pine, who has a nice line in muttered incredulity, and his character’s secretary (Shawn of the Dead’s Lucy Davis). You wait for WW to pour her vital scorn on the hypocritical patriarchy, but she’s only allowed to be perplexed.

Instead, much is made of how beautiful she is (and she is! So beautiful! Have you heard?), and how innocent she is of this beauty, as well as innocent of mankind’s fatal flaws. Being divested of innocence isn’t a bad character arc, even when it’s done as clumsily as it is here, but it’s hard to imagine any male superhero undergoing a similar one, and it’s even harder imagining one who ultimately learns that ‘love’ is the real power to be coveted.

But Gal Gadot! Boy, is she something. Just look at her!