3 CW readers are interested
Doctor Strange film review 4 Doctor Strange film review Matthew Robinson
Benedict Cumberbatch has finally found a role that allows him to sport a red cape and suave goatee – a look that’s perfectly fitting, it turns out. The makers of Doctor Strange knew this beforehand, postponing production of their multi-million dollar film so that Cumberbatch could finish playing Hamlet, and their patience was worth it. The actor is best with characters that are masterful, debonair, and faintly ridiculous, and Sherlock was always kind of a superhero anyway.

Dr Stephen Strange is an arrogant and dismissive neurosurgeon until his life is upended by a car accident (caused by his arrogant dismissal of basic road-safety guidelines). Rather than being grateful that he wasn’t horribly killed or paralysed by his spectacular crash, he's appalled that his hands are now too weak to perform surgery and self-pityingly vile to his on-off love-interest and colleague Christine (Rachel McAdams).

Strange is an unlikeable character with temperment-reversal already written in (whereas Sherlock was allowed to remain incorrigible), and his journey to Nepal results in the superhero-movie equivalent of spiritual enlightenment: the discovery of mystical powers, mentor figures to teach their proper usage (Tilda Swinton, Chiwetel Ejiofor), and a villain to exercise them on (Mads Mikkelsen). Redemption and a renewed sense of purpose, plus spectacular victory, are the nirvana.

It’s a familiar arc, and Marvel Studio’s extreme competence at rendering it might get boring at some point, but for the moment it’s still satisfying to see them perfect their winning entertainment formula. Just as Pixar make films as engaging for adults as for children, Marvel make films as engaging for non-comic-book-fans as for the fans themselves. That might be an incredibly patronising analogy, but (we submit) it’s nowhere near as patronising as rival studio DC’s films Batman v Superman or Suicide Squad. 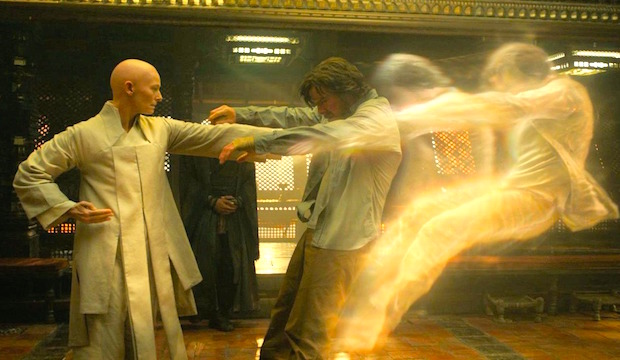 So while we get an origin story that dutifully shows Strange first sculpting his famous facial hair, and which explains how he got his magic cloak, we also get Beyoncé jokes, and some very accomplished slapstick courtesy of the semi-sentient and semi-malevolent magic cloak.

It’s also typically technicoloured in a way that’s almost universally appealing. Strange’s powers involve inter-dimensional travel and space-time bending, so the CGI battles involve all kinds of kaleidoscopic visuals. They’re not especially original, having mostly been cribbed from Inception and similar movies, but it’s a hell of a lot more fun than watching action figures pile-drive each other into skyscrapers, and the execution has a lightness of touch that no Christopher Nolan film will ever have.

Perfectly cast with committed, always-interesting actors, and hitting the superhero-epic beats with almost lazy expertise, Doctor Strange is about as guaranteed a good time as you can have in the cinema. Even the 3D is pretty good.