Unfortunately, that promise is a little too good to be true. As if squeezed into little cramped compartments, no one gets the chance to really flex their acting muscles.

The person who does get to show off is Kenneth Branagh as Hercule Poirot, the famed Belgian detective with a thick accent, and even thicker moustache, whose witty eccentricity Branagh captures superbly, as you’d expect.

As well as playing on the iconic Poirot, Branagh has undertaken the Herculean task of directing this well-known story where 13 passengers, stranded on a lavish transcontinental train ride, are all placed under suspicion when one of them is brutally murdered.

He does his best to hold all the material together, but somehow the film can’t help falling into little set pieces as the detective confronts each of his suspects one by one.

As if it is attempting to distract from the piecemeal nature of the mystery, the film goes big on the cinematic effects. Though you shudder at the cost of the CGI, there are impressive visuals as the Express pulls out of Istanbul and worms its way through the Alps. The avalanche that stalls the train is suitably epic. 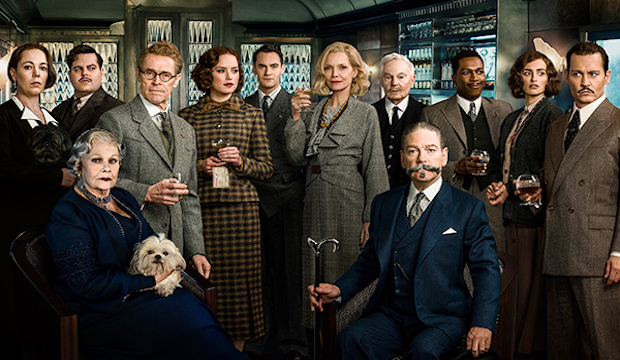 There are also plenty of original camera angles, which make the train’s interior feel as roomy as Grand Central Station. And the movie's equally inventive opening gambit in Jerusalem, as Poirot settles a dispute between a rabbi, a priest and an imam, is a warm and sunny contrast to the snowy terrain of the rest of the film.

But none of this smooth cinematic trickery quite succeeds in pulling the wool over our eyes.

Murder on the Orient Express was an obvious excuse to cluster some stars together — the 1974 version was also packed full with talent — but that only seems justified if everyone is given the opportunity to showcase their skills.

Otherwise, it's just a marketing ploy; so many names on a poster. This is quite clearly the case here. The stars may all be out but none can shine through the heavy fog of a pedestrian script.

There is a hint of a sequel at the end of the film (a nod to Christie’s Death on the Nile?) but we sincerely hope this is the potential franchise’s first and final destination.