A powerful symphony, brilliant overture and mysterious violin concerto demonstrate the impact of war on music, and vice versa

Beethoven's Eroica, Royal Festival Hall Beethoven's Eroica, Royal Festival Hall Claudia Pritchard
Revolutionary zeal was coursing through Beethoven when he wrote his Third Symphony in 1804, which he proudly dedicated to Napoleon. But before a note could be played he heard his hero had declared himself Emperor, and flying into a rage, the composer tore the title page off the symphony’s manuscript and threw it on the floor.

TRY CULTURE WHISPER
Receive free tickets & insider tips to unlock the best of London — direct to your inbox
So goes the popular story behind the change of title from 'Buonaparte' to 'Eroica' – 'to celebrate the memory of a great man'. Scholars are now divided on whether practical and financial considerations simply outweighed idealism in Beethoven’s change of heart, but whatever the reason, the music remains truly revolutionary, forever recasting the future of the symphony.

It forms the mainstay of War and (troubled) Peace, a highlight in the London Philharmonic Orchestra’s concert series Belief and Beyond Belief, which it sees as an exploration of “being human in the 21st century”.

Conducted by Alain Altinoglu, the orchestra will open with Tchaikovsky’s spectacular 1812 Overture, a piece written in memory of Russia’s victory over Napoleon at the Battle of Borodino. Famous for its evocation of thundering ordnance and charging cavalry it is probably one of the most recognisable pieces of music ever written. Poor Tchaikovsky loathed its popularity.

Schumann’s Violin Concerto from 1853 is an altogether more introspective piece, partly a product of the composer’s own struggles with mental illness. Unknown for 80 years, it was 'discovered' against the wishes of his descendants and wickedly presented as an example of Aryan purity by Nazi propagandists in 1937. No such associations persist today, leaving its inner fragility and lyrical beauty unsullied.

In this performances, the distinctive Patricia Kopatchinskaja is the soloist. 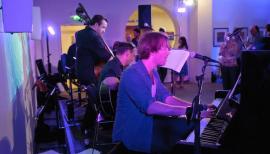