He transformed his players and the capital's tastes. Now the Russian-born conductor is ready to party – the classical music way. By Claudia Pritchard 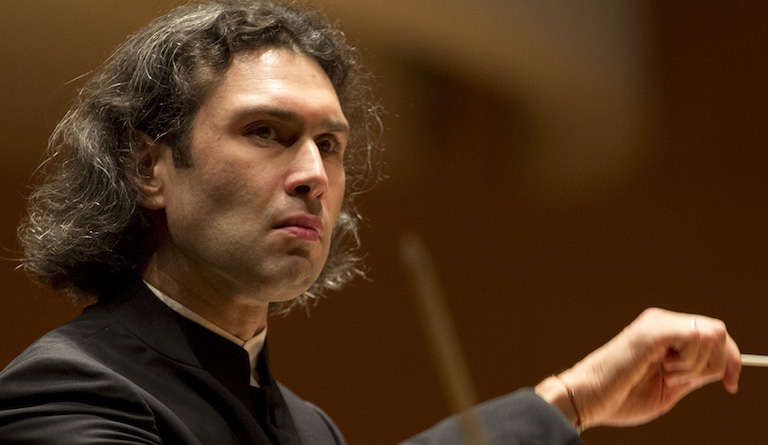 Born in Russia, raised in Germany, attached to London, Jurowski speaks music's international language. Photograph: Drew Kelley
With one foot on the podium and one in the departures lounge, an orchestral conductor at international level can appear to be perpetually on the move. One Russian is famous for explaining that he was only a few hundred yards from where he was supposed to be and on the move. When his baffled musicians went out to find him they looked up: he was on a plane overhead.

So the dedication to London of Vladimir Jurowski – also Russian-born, but from a very different mould – is a special thing. And his relationship with the London Philharmonic Orchestra, one of the two symphony orchestras that proudly bear the capital's name, has been maturing since December 2001, when he stood in at short notice for another, indisposed, conductor, while working in opera. Accepting the challenge meant learning Prokofiev's 5th Symphony in a few days, and brushing up other pieces. His unexpected debut with the LPO was a triumph. Little wonder that within five years he was made principal conductor, and now celebrates 10 years in that job.

That he should burst on to the London orchestra scene with music by a fellow Russian was very appropriate, and from that sudden debut he has been associated with the most intense and intelligent interpretations of the great Russian orchestral pieces of the past 200 years. Among audiences favourites, his Tchaikovsky, Shostakovich and Stravinsky are heart-felt, highly coloured and distinguished by a singing line that owes as much to his years as artistic director of Glyndebourne Festival Opera, from 2001-13 as to his lineage.

And in celebrating his 10 years he is also looking ahead to a highly charged musical year for London: Brexit and funding cuts have cast a cloud over budgets, while another conducting star is on his way, in the form of Sir Simon Rattle, coming to the London Symphony Orchestra in September.

The LPO has to pull something pretty spectacular out of the bag, and it is certainly doing that with its 2017/18 season, announced in January 2017, and both continuing the themes of its 2016/17 season and starting new strands. Outstanding in its 12 concerts with Jurowski (there are many others with guest conductors too) are the launch of an entire Ring cycle, to be performed over a number of years, an exploration of the many works of Stravinsky which lie in the shadows of the much-loved Firebird, Petruschka and Rite of Spring, and a string of exciting works by neglected composers from Russia and the former Soviet Union.

Among these is Valentyn Silvestrov, a Ukrainian whose works are played in Russia but who is banned from the country, Dimitry Kabalevsky, whose Spring is played in a series of concerts inspired by the seasons, and the prolific Anatoly Liadov, who died in 1914. Jurowski's gift for programming that satisfies the audience, stretches the orchestra and refreshes the repertoire allows unfamiliar work that makes an immediate impact to be played alongside favourite pieces. That he can do this is down to the new generation of musicians he has inspired.

"The orchestra has changed immeasurably," he says. "When I came here 75 per cent of the players were older than me. Now I am the middle-aged one, and sone of the players are only a little bit older than my daughter [Martha, in her late teens. At home in Berlin he also has a school-aged son, Yuri]. Our principal bassoon player is brilliant, and he is 23!"

He ascribes much of the teamwork success of the LPO to its self-governing nature: players have a huge say in who comes in, and the synergy between players and orchestra is palpable. "We understand each other without having to say much. Now is the time for really adventurous programming."

The LPO is also the resident orchestra at Glyndebourne for four months of the year. That work, with Jurowski's background, paves the way for concert performances of opera at the Royal Festival Hall: Das Rheingold, which opens the Ring cycle on 27 January 2018, simply cannot be performed at Glyndebourne, because of its vast scale. Jurowski hopes to keep the singers in character across the four operas of the cycle in successive years, making it a measured and extensive journey for musicians and audience alike.

With his eye on the middle distance, he is also encouraging a scheme that brings promising young musicians from disadvantaged backgrounds into classical music, as Junior Artists. They will be embedded with the orchestra, and will be supported by the LPO as they progress to music college. That means there is every possibility that by the time the Ring cycle concludes, the orchestra could include a new member who has come up through the scheme.

"What Vladimir has brought," says LPO chief executive and artistic director Tim Walker, "is a steely discipline to the way the orchestra rehearses."

With his romantic mane of hair and intense gaze, Jurowski cuts a dashing figure when he strides to the podium. Londoners who like their classical music richly seasoned will be looking out for his appearances. And they won't be disappointed.