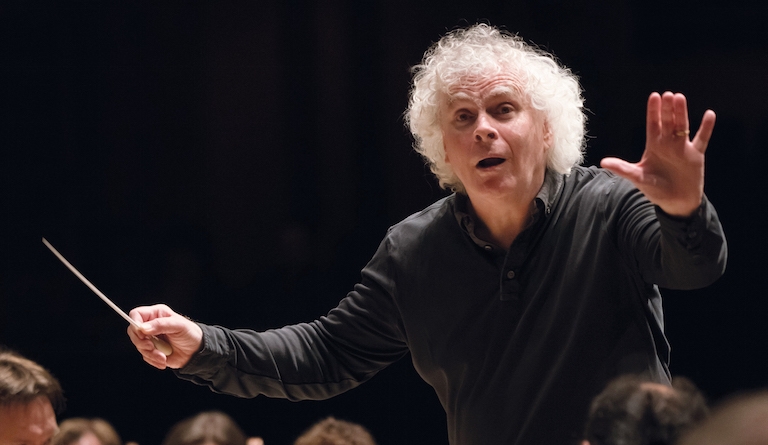 It is this affable down-to-earthness of the conductor who was born in Liverpool, cut his teeth on (and transformed) the City of Birmingham Symphony Orchestra, and has spent 15 years with the Berlin Phil, that has endeared him to generations. But it comes coupled with an unfading passion for music, for championing new and overlooked composers and for undertaking colossal projects. And that makes his arrival in London such a boon not just for music in the capital but for the arts in Britain in general.

That he, the consummate European, was unveiling his first season in London at the very same moment that Theresa May was outlining her plans for detaching Britain from the rest of Europe was an irony lost on none. There is nothing solely nationalistic about his putting British music at the forefront of his programming, and he wants his first full year with the LSO, starting in September, to set the tone for what follows. 'I hope the season is like a tapas bar of the kind of things I have in mind,' he says.

And those kind of things include events that take music out of the concert hall and into new spaces, meeting halfway with new audiences. 'I have an artist son and whenever we are in London together we go to Tate Modern. And last time I stood on the bridge and wondered what it would be like as a performance space.' That thought has lead to plans to stage Stockhausen's multifarious, immersive work Gruppen in the Turbine Hall in 2018.

A devoted interpreter and promoter of Mahler, Rattle once begged a broadcasting company to give him a copy of the recording of the Mahler Symphony No 9 he had just conducted on air. When it did so, he discovered that the recording had been made over the top of another Mahler piece, Das Lied von der Erde. The composer did not live to hear either piece performed. 'And I've heard the two pieces played at once!' And that got him thinking about the music that was never played in its creator's lifetime – another theme in the opening season.

He is also going to bring to light a piece by seven composers combined, including Schoenberg, Stravinsky and Milhaud – creative people who had fled a dangerous Europe for the safety of America. This Genesis Suite will be played for the first time in the UK on 13 January 2018, with multimedia interpretation by Gerard McBurney.

With a passion for inspiring music-making and music appreciation in young people (and a family of his own) he will be continuing the LSO's already substantial work with children. 'In Berlin we have introduced the kind of programme that the LSO has been doing for years.' That's the kind of life-changing work that can turn a child from knowing nothing about music to staying, after a few hours' exposure, 'It's been the best day of my life.'

But where will that new audience got? All eyes are on the prospects for a new concert hall for London, which hit a snag recently when government funding was withdrawn for the feasibility study, and then took a big step forward again with new funds from the City.

'We can do a lot of wonderful work in the Barbican [the LSO's home for 35 years], but there's about 20 per cent of the repertoire that we can't do.' There is not always enough room, for example, for a chorus; luckily that wasn't a problem in Peter Sellars's January 2017 semi-staging of Ligeti's Le Grand Macabre, with the LSO conducted by Rattle – the singers simply flooded up and down the gangways.

Other highlights of the first Rattle year will include a Bernstein strand, early evening short concerts for those who like to listen and eat on the same evening, and not have to choose between the two, and work by living British composers, including Sir Harrison Birtwistle, and Helen Grime, whose Fanfare plays Rattle into his post at the start of theThis Is Rattle festival (14 – 24 Sept).

It all makes the music-lover feel pretty happy to be in London at this time. Even if the new concert hall is, as Rattle says, 'if, rather than when', there is music ahead under his auspices that people are going to recall being part of for years to come. The conductor sprinkles stardust on the capital's orchestral music scene. As Barbican managing director Sir Nicholas Kenyon says: 'Consider where else Sir Simon Rattle might be in the world – and this time he's chosen to be in London.'