The music, the artists, the clothes, the food ... it's one long party at the BBC Proms 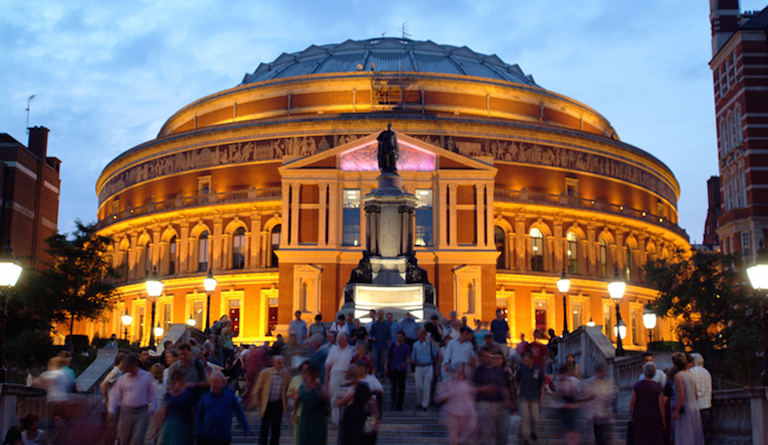 The Royal Albert Hall is the home of the BBC Proms, but there are events all over London. Photo: BBC
The biggest classical music festival in the world,the BBC Proms, opened on Friday 13 July. There are performers and composers for all tastes in the 90-plus concerts, most of which are staged at the Royal Albert Hall. For eight weeks, familiar classics and new works will be played by top international artists, until the festival ends on Saturday 9 September.

TRY CULTURE WHISPER
Receive free tickets & insider tips to unlock the best of London — direct to your inbox
If you are already a classical music fan, you will be in your element. But many people are turned on to classical music for the first time by the Proms' relaxed atmosphere and the directness of the music-making. With audience and players only feet from each other, and with tickets starting at only £6, the Proms are an easy way to digest everything from Beethoven to Bernstein.

Our resident classical music expert and regular Prom-goer shares top tips for getting the most out of this year's Proms.

The Proms prides itself on championing new or neglected pieces, and many audiences have discovered new favourites this way. With the world's great orchestras heading for London, this is the best time to catch massive names.

Every evening, at a pre-concert event – often a few metres away at Imperial College – experts shed light on unfamiliar pieces and explore aspects of the works ahead. This easy-going preparation, coupled with the dynamism and immediacy of live performance, makes works spring into life on the night.

The Proms is also a chance to catch rising big-star names as well as those who have dominated the music scene for decades, such as the conductor Daniel Barenboim (Prom 43, 14 Aug).

To see if your favourite composer is anywhere on the programme, go to the Proms composers’ A to Z: it will tell you which of their works are being played on any given night, and what with what other works

All is not lost if your chosen concert is already sold out: every day hundreds of up to 1,350 Promming tickets are released for that night’s event – for those prepared to stand, or who want to get up-close to the orchestra. (For tips on getting your hands on these Promming tickets, see below). Furthermore, many tickets for seats are returned to the box office close to the performance date, and become available to all. Touts will be circling, which is flattering to the musicians, but the box office will serve you better.

Seat prices vary, depending on the programme, but you will be have a decent view from every seat in the house at the Royal Albert Hall, and the swivel seats in the Stalls allow you to turn towards the stage. Alternatively, take a box and have a party. Book ahead directly here or by phoning 0845 401 5040.

First pick your team: there is friendly rivalry between those who stand in the Arena, right at the foot of the stage, and those who go to the very top level of the Royal Albert Hall for a bird’s eye view, and, often, more room. At some less crowded events you can take your weight off your feet and lie on the floor! You can book a Promming ticket online, from 9am until noon on the day of performance, with one or two Proms selling the day before.

Tickets at £6, to stand in the Arena at the Royal Albert Hall, are sold usually two and a half hours before the concert, and any remaining on the relevant entry doors from 45 minutes beforehand: Door 11 for the Arena, Door 10 for the Gallery.

If a concert grand needs moving for a piano work, Prommers in the Arena shout, “Heave...”; Prommers in the Gallery reply: “…Ho!” Then, before the soloist joins the platform, the leader of the orchestra – the player on the front desk of the first violins (on your left) – strikes the A key, to check the orchestra is in tune with the piano. At the sound of this virtuoso performance, a tremendous cheer goes up and the Prommers applaud wildly.

After the interval, Prommers chant an appeal for musical charities to the audience every night. The charities get young people into music, take music to those deprived of it, and help performers when their careers have ended. Last year, the nightly collections raised around £100,000. You won't be able to miss the Prommers shaking their yellow buckets as you leave so have your donation ready!

It can get hot – very hot – in the Royal Albert Hall, so be prepared to peel off. If you are seated, anything goes, but some people dress up. When a big international artist’s entourage is in the audience, they favour glamour, sometimes putting the rest of us to shame.

If you’re Promming, your feet come first. Wear comfy shoes, and be ready to sit on the floor if you tire. This may not be the night for a mini skirt. The person next to you may be wearing cycling Lycra. Don't panic.

There are many bars and restaurants at the Royal Albert Hall for refreshments before, during and after the show. Take your pick here.
Many people picnic before the concert in Kensington Gardens, opposite.

Some concert-goers take refreshments for the interval, but beware: you only get a few minutes, by the time you have filed out and allowed time to get back, which is a slow process each way.

No glass bottles are allowed in your bags, which will be checked, and no drinks bought in the bars may be taken outside, out of consideration to residents in the adjacent mansion flats. Nonetheless, many music-lovers manage a superfast picnic, which makes the second half of the evening go with a swing.

Here's to the BBC Proms. Cheers!!