Relaxation is hiding away with a piece of music to play, when you have two pre-school children 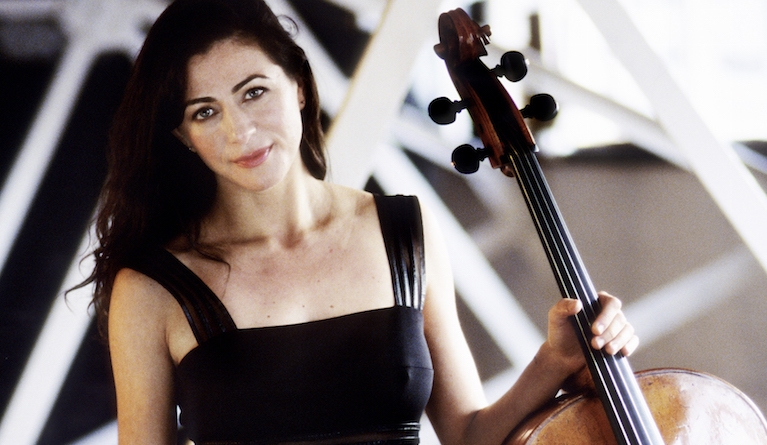 Natalie Clein: touched and moved by the Dvorak concerto. Photograph: Sussie Ahlburg
Natalie Clein has dashed out for a quick coffee, and it’s her second such escape today: she’s just had a Thai massage too, and is feeling the benefit of having her knots untied. As a world-class cellist, she probably has more interesting knots than the rest of us, an incomparable 1777 Guadagnini cello making rather different demands on the physique than an overstuffed shoulder bag.

“It's important to look after your body when you’re a cellist,” she says. "I tell my students [she is a professor at the Royal College of Music] that we should treat out bodies as athletes do.” A mother of two pre-school children, at 39. and slim as a reed, does she work out? "I should do more than I do. It's the life of every working mother, running from thing to thing."

The “things” in Natalie’s case include 20 concerto performances between now and Christmas. “It's always a busy season, and I had postponed a couple of things because I had taken time of with the baby. Now, relaxing is when you go on tour and are away from home for a night! Mothers who are ‘just' looking after their children … it’s the most tiring job of all!”

The first of two tours with the Czech National Symphony Orchestra begins in the orchestra’s home city of Prague, and includes a number of British dates, including one at the Cadogan Hall on 9 November. The second is with the Orchestre National d’Ile de France, with whom she plays Haydn concertos.

On the British tour she plays both the Dvorák and the Shostakovich cello concertos, but at Cadogan Hall in an all-Czech programme she plays the Dvorák, a great favourite with soloist and audiences alike. "I appproach it with great love an great respect. It’s one of my oldest and trusted friends that I come back to.

"One of the things I love about the Dvorák is that it’s like a house: it’s not just the beautiful objects that count, it’s the wallpaper, the doors ... what’s in between. The music has bridges, and the composer’s own Prague is full of beautiful bridges. He writes so beautifully for cello and it is so suited to the sound of the cello. I always feel touched and moved by it.

"The possibilities and abilities of the cello are close to those of the human voice, and the melodies are meant to be sung. The slow movement was based on a song loved by Dvorak's sister-in-law, who later died."

The concerto was first performed in 1896 – not in Prague, or in Dvorak’s adopted home, New York, where he was director of the National Conservatory, but in London. "You can hear him yearning, away from home. Brahms said that melodies pour out of Dvorák like water and that he would have written a cello concerto if he had known it could be like that."

With the Elgar and the Schumann, these concertos form the cornerstones of the cellis’s repertoire. But Natalie is interested too in the music that does not play so well at the box office.

"The danger is that as students we are concerned only with the best: if you are studying literature, you read Hamlet. But we should get to know “B” music to understand why other music, like the Dvorák concerto, is so great.”

Natalie, who grew up in a musical household in Dorset, began learning the cello at six, and at 16 won the BBC Young Musician of the Year with the Elgar concerto. Now her daughter, aged three, is starting the violin, and she really hopes that music will be part of her life too.

"I remember going to sleep on the sofa listening to my parents playing string quartets. I hope my daughter will have that. We should expose children classical music – have Radio 3 on, play a CD. Just in the background is fine. Go to live music-making. The Bremen Chamber Orchestra have a rehearsal room in the middle of what was a failing school and beautiful things have happened. I think that’s a fabulous idea, a beautiful idea.”

Yes, but what about that troublesome musical instrument practice time, the bane of so many parents’ lives? Perhaps it’s the difference between a virtuoso and the rest of us, but as a youngster this cellist was happy doing her scales.

"I never struggled with practice. I was hungry to be the best cellist I could be. It was a beautiful time of peace and concentration. It’s almost a form of meditation. Now with children it’s quite a luxury to be alone with a piece of sheet music. My playing is influenced by other arts and everything else – an exhibition , a play, a book I’ve read."

In September, with Juliet Stevenson at the Purbeck festival of which Natalie is artistic director, extracts from TS Eliot's Four Quartets were interspersed with chamber music. I like the sound of that. Will she do it again? No, it was a one-off – and the concept of music that comes and goes with the moment is important to her. “The pianist Martha Argerich says she is nervous about every performance because she understands the ephemeral nature of it. That moment, that combination of people, will never come again.”

Natalie agrees that this sounds nerve-racking. "If I’m too calm it’s not going to be my best performance. But it’s important to feel gratitude. I had to play a difficult Bach programme after months of being up every night with my baby. I felt really grateful to be able to go on stage and share my craft: it’s a mutual experience.

"I would recommend to anyone when they turn 30 to go and study again. You could still be hungry for knowledge, but not worried about the outcome, and not trying to be someone you’re not.”

Natalie's idols as she grew up were the Russia cellist Mstislav Rostropovich, and the British player Steven Isserlis. Among her fellow players she admires “the ones who are different every time”. But her musical tastes are not confined to the classical repertoire: "I love Stevie Wonder. I loved Prince: he was fantastically spontaneous.”

Now, after the vote to leave the EU she is concerned for all music-makers. "I’m very worried about the students who would have come to study in Britain. They will be the poorer without that, as Britain will be. I’m worried about the loss of the EU cultural budgets which have funded all sorts of projects. My art is absolutely without borders. People from all cultures are part of my everyday life.

"It’s a cliché, but music is a universal language: you can communicate without saying a word, and musicians have to be able to travel and study so that music from around the world can come together without it being an issue. Yet people say that music-making is a good model to apply to a business.

"If sterling falls further, we aren’t going to be able to afford European guest artists, and we are going to be much poorer culturally as a result.”

In an uncertain world, she takes comfort in unchanging things: "My art has been the same for 400 years."