The world's finest orchestras, conductors, singers and instrumental soloists head for London for the biggest music festival on the planet

TRY CULTURE WHISPER
Receive free tickets & insider tips to unlock the best of London — direct to your inbox
Look out for the mould-breaking conductor Teodor Currentzis and his MusicAeterna (28 July), the West-Eastern Divan Orchestra with its Jewish and Arab players under Daniel Barenboim (14 Aug), the prestigious Berlin Phil (1 and 2 Sept) and the Boston Symphony Orchestra conducted by Andris Nelsons (2 and 3 Sept). 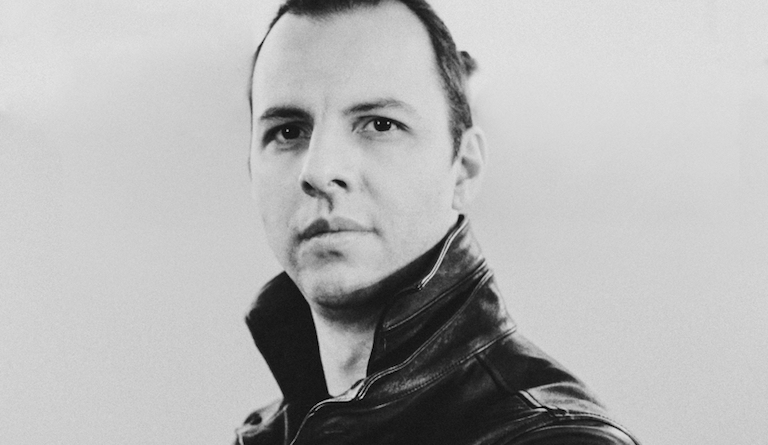 Themes that run through the Proms include commemorations of the end of the First World War, the centenary of the first votes for women, music by women composers, the music of France and music for young people.

There are some astonishing feats of memory – Aurora Orchestra playing Shostakovich’s Symphony No. 9 (6 Aug) and the pianist Andras Schiff playing Bach (29 Aug).

The centenary of the birth of the composer and conductor Leonard Bernstein is marked with concerts including music from Candide and concert performances of West Side Story (11 Aug) and On The Town (25 Aug). The Minnesota Orchestra, playing Bernstein’s Overture to Candide (6 Aug) is one of three US orchestras visiting the Proms. Look out too for the Baltimore Symphony Orchestra under Marin Alsop (27 Aug). 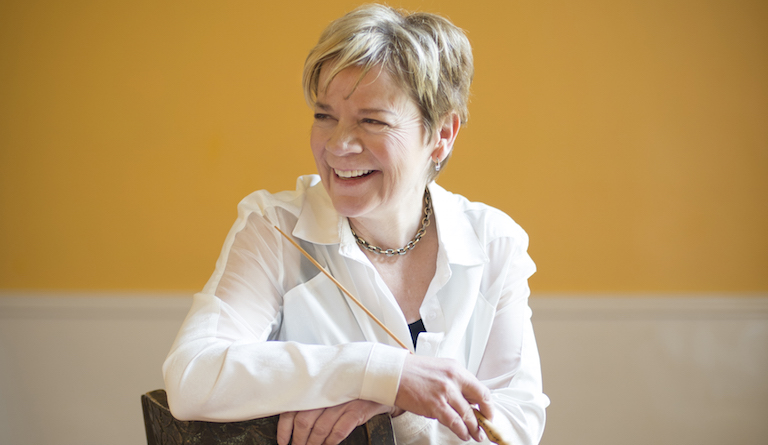 A French theme running through the Proms cues the music of Berlioz, Messiaen and Debussy, in the year that marks the centenary of the composer’s death.

The essential works at the heart of every child’s musical education are played in the Ten Pieces Proms (29 July), with works by Copland, Stravinsky, Tchaikovsky and others. 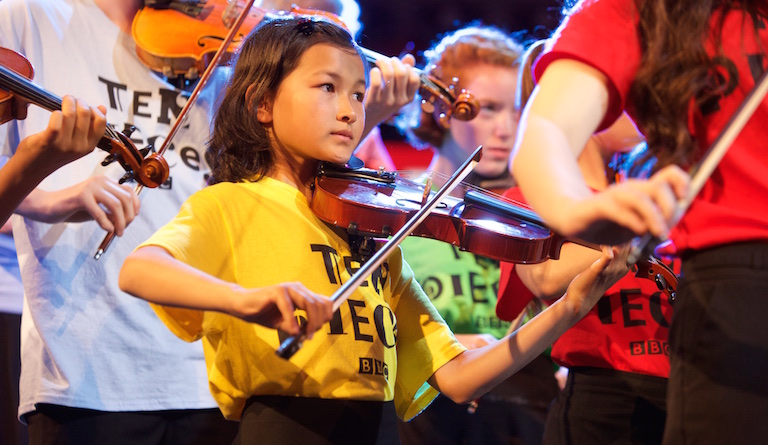 Young musicians will contribute to the Ten Pieces Prom, which introduces children to core classics

Also highly recommended for younger audiences is the concert marking 40 years of the BBC Young Musician (15 July). Finalist from the 2016 competition, the brilliant saxophonist Jess Gillam, performs in the massive Last Night of the Proms (8 Sept).

The Last Night features a new commission by Roxanna Panufnik, one of the most appealing composers working in Britain today. Her generation of women composers follows trailblazers including Lili Boulanger, the centenary of whose death is marked in a number of programmes, and Ethel Smyth, whose music is played (1 Aug) by the BBC National Orchestra of Wales.

BBC orchestras are at the heart of the Proms, the biggest music festival in the world, and that means broadcasts on radio and television for armchair music-lovers. BBC Four’s Friday and Sunday visits, from 15 July to 7 September, include several concerts ideal for the whole family, including Grieg’s Piano Concerto (17 Aug), with soloist Khatia Buniatishvili. 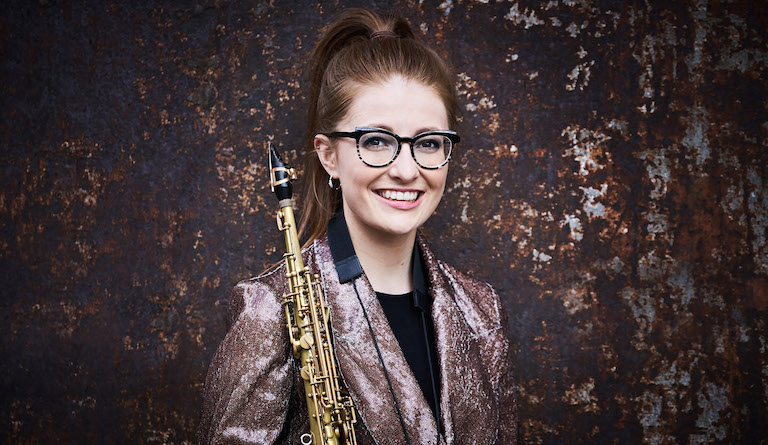 While music from all over the Western world and beyond is played, there is a strong British thread running through the Proms, demonstrating the influence of other European composers in particular on those writing here. The operetta Trial By Jury by Victorian satirists WS Gilbert and Arthur Sullivan re-opens the newly restored theatre at Alexandra Palace (1 Sept).

Other Proms that go outside the Royal Albert Hall include the London Sinfonietta’s Camden Roundhouse concert of contemporary music (21 July) and, at Lincoln’s Drill Hall (4 Aug), two performances of Stravinsky’s music-theatre piece The Soldier’s Tale.

Opera at the Proms includes a concert performance of Handel's moving Theodora (7 Sept), with the outstanding soprano Louise Alder (who was audience favourite at Cardiff Singer of the World) and the counter-tenor Iestyn Davies, back from a run on Broadway with Mark Rylance in Farinelli and the King.

There is more music for voices. Traditionally the Proms includes a performance of Beethoven's Symphony No. 9, concluding with the Ode to Joy, adopted as the anthem of the EU. This year the piece is performed (21 July) with Britten's Sinfonia da Requiem. In 2017 ushers intervened when concert-goers waved EU flags in Beethoven's rousing last movement. You can be sure pro-EU Prommers will be joining in with even greater passion this year. 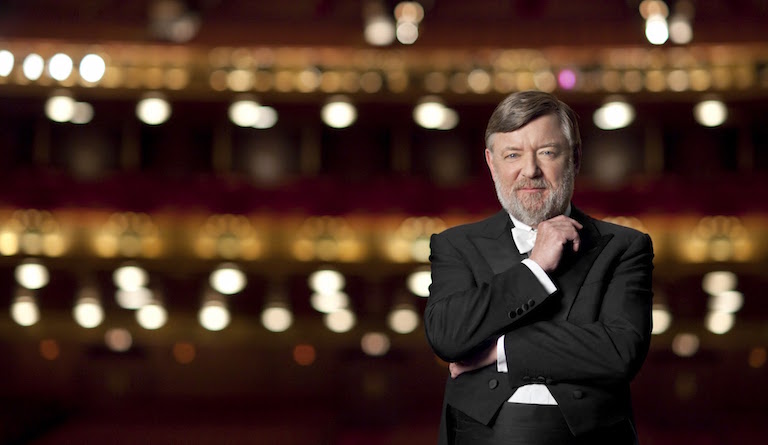 Sir Andrew Davies conducts The Last Night of the Proms for the 12th time. It will be his 130th Prom. Photo: Dario Acosta

Those whose attend other Proms can enter a ballot for tickets to the Last Night, and at Proms in the Park (8 Sept) in Hyde Park, there is a programme of live music before the open-air audience joins those in the Royal Albert Hall via the big screen.

Whether you are a classical music addict or new to concert-going, the BBC Proms offers unbeatable programmes in a lively and relaxed atmosphere. You can stand (or sit, or lie) in the Arena, or right under the great Royal Albert Hall domed ceiling, or watch in greater comfort from seating all over the great concert hall. Late-night events are particularly magical.

Look out soon for Culture Whisper's recommended Proms, from Bach to Bernstein and back again.

Public booking for the BBC Proms opens on 12 May. Click here before that date to build your own Proms planner ready for tickets going on sale.