TRY CULTURE WHISPER
Receive free tickets & insider tips to unlock the best of London — direct to your inbox
In March 2017, Gainsborough's £24M The Morning Walk – one of the most famous portraits hanging in the National Gallery's East Wing – hit the press when Kieth Gregory slashed the two-metre high canvas with a drill bit. Following a court trail, the homeless offender was released without charge on the grounds of psychosis.

A few months later, Gainsborough was back in the spotlight following the rediscovery of 26 Gainsbrough watercolours at Windsor Castle. The portfolio, which entered The Royal Collection in the 1870s under the supervision of Queen Victoria, was mistakenly attributed to Sir Edwin Landseer. With the attribution now confirmed by multiple Gainsborough scholars, The Royal Collection has announced plans to exhibit the drawings next year. 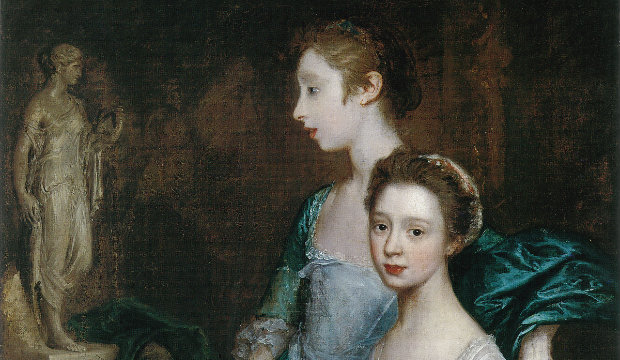 This winter Gainsborough hits the headlines once again, as a retrospective of his life and work opens at the National Portrait Gallery. Featuring over fifty paintings from public and private collections across the world, Gainsborough’s Family Album charts the portraitist's career trajectory, from youth to maturity, and his rise from an eighteenth-century provincial artist to the one of the greatest portrait painters of all time.

One of the original members of the Royal Academy, Gainsborough started as a landscape painter, only turning to portraits in his later years because they were a more lucrative source of income. This chronological exhibition offers 'a new perspective on Gainsborough the portraitist and challenges our thinking about his era and its relationship to our own', explains exhibition curator, David Solkin. It also offers an unparalleled insight into Gainsborough's private life and the role portraiture could play in the promotion of family values. Sumptuous portraits of his wife and his daughters, Mary and Margaret, abound, as do rarely-seen portraits of the artist himself. There's even an exquisite drawing of his wife Margaret's pet dogs, Tristam and Fox nestled among the formidable faces.

This is a manageable exhibition showcasing exquisite works, but it's inescapably academic and traditional in its approach. If you're an avid Gainsborough fan, this is a marvelous opportunity to see so many Gainsborough portraits reunited. If not, though, we suggest maybe giving it a wide birth.