The titles of Perry's pieces lay bare in no uncertain terms what he wants to say. Shopping for Meaning is an elegant vase decorated with photographs of the artist taken by Eleni Parousi. With this work he is parodying capitalism's promise – and the consumer's belief – that acquiring expensive things can lead to some sort of self-discovery. In these images he is dressed as a middle-aged women in various outfits with a headscarf and large sunglasses, posing in front of Mayfair’s designer stores.

Another work, entitled Thin Woman with Painting, depicts a cartoony-looking patron at home with her art collection and a vase much like Perry's sitting behind her. She looks anxious and a touch manic and the words 'alcoholic' and 'suicidal depression' float above her head. Is her need to acquire expensive things a symptom of her sadness, or the cause of it? Wealth and happiness, Perry is saying, are not necessarily companions. He lambasts Instagram culture, too. An amphora with a reflective surface is covered in blank, outlined shapes, labelled with descriptions of images typical of social media, such as 'reflections in a puddle', 'bride in a field', 'quirky vintage car', suggesting a copy-and-paste approach to the idea of individuality, and reminding us of the hollowness of digital identities. 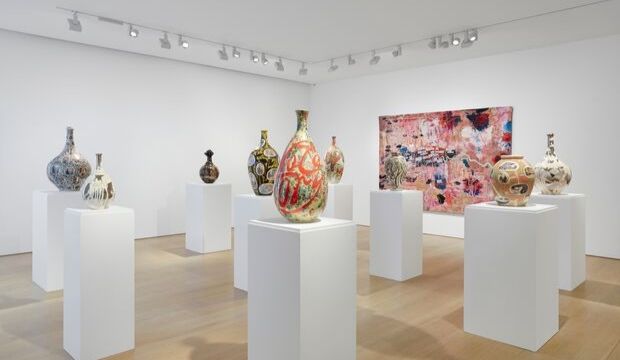 There is a collection of limited-edition handbags here, too, designed in collaboration with Osprey. There are eight available at £1,800 each, in a range of bright colours, with comically phallic Alan Measles clasps. The interiors are decorated with the names of tax havens and the words 'Vote Tory'. In the neighbouring room a large rug titled Don't Look Down, depicts a homeless man in a sleeping bag surrounded by bottles and discarded fast-food containers. The irony is, of course, that this work will end up in the hands of a wealthy collector.

It is obvious that Perry is parodying the vacuous world of social media and mindless consumerism. Acquiring stuff doesn't make us happy, nor, he seems to be telling us, does collecting art. So is he mocking those who buy his work? As a successful celebrity artist, whose art sells for a fortune, the potential hypocrisy is obvious. Perry’s art is, after all, a commodity, a status symbol that can only be afforded by the very wealthy and without whom he could not make the very comfortable living that he does. But for the artist, no corner of society is off-limits. And are these pieces really so acerbic, that people would not buy them? Probably not. Nam June Paik said ‘the artist should always bite the hand that feeds him – but not too hard', and we wonder how much this sentiment occupied Perry's mind as he prepared for this exhibition.

This show offers what we've come to expect from Perry – the daft, the cutting and the fun, but nothing overly new. We are familiar with his vases and the social commentary that covers them. His tapestries and rugs, which were once novel, are now a mainstay of his exhibitions. Still, this is worth a look.