In commemoration of the centenary of Armistice Day, more than 40 of Alfred Munnings's most celebrated wartime paintings go on display in the UK for the first time since 1919

8 CW readers are interested
Alfred Munnings: War Artist, 1918, National Army Museum Alfred Munnings: War Artist, 1918, National Army Museum Lucy Scovell
Cavalry soldiers gallantly charging into battle; horses grazing next to soldiers at rest; and exhausted horses heroically transporting troops and goods to the Front are among the evocative subjects of British artist Alfred Munnings's most celebrated wartime works. Employed as an official war artist to the Canadian Cavalry Brigade in 1917, Munnings diligently captured the fighting front and the crucial logistical work behind the lines. The artist, later elected president of the Royal Academy, has long been regarded a pivotal figure in the commemoration of the Canadian war effort and one of Britain's most talented equine artists.

Now, in commemoration of the centenary of Armistice Day, a prestigious collection of Alfred Munnings works dating to 1918 from the Canadian War Museum go on display in the UK for the first time since 1919. This remarkable exhibition at the National Army Museum brings together more than 40 exquisite paintings that showcase Munnings's emerging mastery of equine subjects. Alfred Munnings: War Artist has been developed by the Canadian War Museum in partnership with The Munnings Art Museum and generously supported by The Beaverbrook Canadian Foundation. 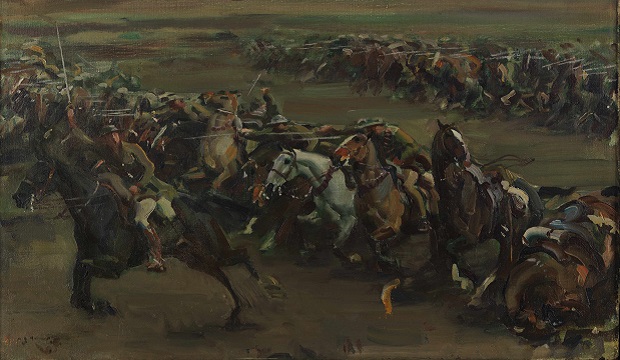 'It is a pleasure to share works by Alfred Munnings with an international audience,' said Mark O'Neill, President and CEO of the Canadian War Museum and Canadian Museum of History. 'His paintings of First World War scenes – from the men and horses who served in wartime, to forests and battlefields -are an evocative reflection not only of Canada's military history, but the development of one of England's best-known artists.'

Among the highlights on display is Ruined Chateau at Ennemain, Near Athies, painted by Munnings in 1918. The somber painting is a striking reminder of the devastating destruction and desolation that swept through France during the war. Also on display is Charge of Flowerdew's Squadron, 1918, which depicts the gallant charge of the Canadian Cavalry Brigate at Moreuil Wood on 30 March 1918. Most of the troopers and their horses were tragically shot down in a hail of small arms fire from German soldiers.

The works on display 'are amongst the best work by the artist and, exhibited together, they tell an evocative story of service and sacrifice by both soldiers and horses', said Justin Maciejewski, Director of the National Army Museum.

The exhibition is accompanied by a book edited by Dr Jonathan Black, 'Alfred Munnings: Memory, The War Horse and the Canadians in 1918', and a public programme at the National Army Museum.