Following on from the first series, in which a young Queen Victoria escaped the domineering Sir John Conroy to carve out a life of her own, including the initial years of reign and courtship with the brooding Prince Albert (who, if we're honest, we had a teeny-tiny crush on last year), season two continues to follow the young monarch as she faces fresh trials at home and in her duties.

TRY CULTURE WHISPER
Receive free tickets & insider tips to unlock the best of London — direct to your inbox
Season two is set to catch up with Victoria and Albert six weeks after the series one finale, as the new parents struggle to adapt to having a new child while juggling their individual responsibilities. The Queen famously hated being pregnant, while Albert was understood to adore fatherhood.

Victoria is shown struggling to unite the apparent contradiction between her role as monarch and the expectation that she be a subservient wife (something our own Queen had to go through, if Netflix's The Crown is to be trusted).

Season two is set in the 1840s, which saw Victoria give birth a further five times after her first daughter was born (and then, if you can imagine it, another three times during the next decade). It was also a time of political unrest in Britain, great famine and yet more assassination attempts on the Queen.

Jenna Coleman's Victoria will return this autumn for another eight episodes, with a two-hour Christmas Special later in the year. We can't wait for the new season to begin. 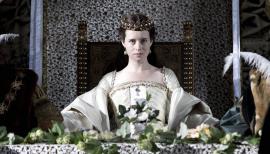