Big hair, big biceps and even bigger attitudes. Mad Men star Alison Brie is talk of the town in this Netflix comedy about female wrestlers: GLOW

1 CW reader is interested
GLOW, UK Netflix review: 4 GLOW, UK Netflix review: Hailey Wendling
Behold GLOW – the gorgeous ladies of wrestling – who are body-slamming their way on to Netflix in this brutally original new series, arriving on the 24 June. This is the funny, refreshing and gloriously pro-women show we've been waiting for.

It's no surprise to discover that GLOW was made by Jenji Kohan, the mastermind behind, and creator of, Orange is the New Black. Comparisons between the two shows are unavoidable. The extraordinary (and depressingly rare) qualities that made OITNB a world-wide phenomenon are all here in GLOW, but this time, they're trussed up in glitter and Spandex.

The 10-part series was inspired by the original 1980s G.L.O.W., a Las Vegas-based syndicated TV series that included sketches and songs as well as wrestling. It's all about women, so expect to see a lot of them. Plenty of women, dealing with women's problems, and talking to women about other women. There are so few shows like this. Just one, in fact... Orange is the New Black.

A casting director takes pity and points her in the direction of Sam Sylvia (Marc Maron), a B-movie director who, with a motley crew and some big dreams (and very little know how), is trying to create a cast of female wrestlers. Wrestling, we discover, is actually a soap opera, but with body slams instead of screaming matches.

When ex-actress and angry best friend Debbie (Betty Gilpin) arrives in the middle of one of Ruth's auditions to literally beat her up for ruining her marriage, Sylvia decides he has found his perfect wrestling opponents. Just like Piper and her frenemy Alex from OITNB, the two women find themselves in a small, confined space (this time a motel rather than a prison) with a load of other women and have to deal with their own, and everyone else's, many, many problems.

GLOW is sillier than OITNB, less dark and less political, but it's still magnificently refreshing, feminist, nostalgic and clever, and an absolute must-see TV show for the summer. 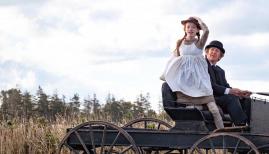 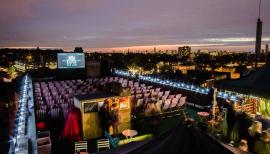