6 CW readers are interested
The Handmaid's Tale review Channel 4: 5 The Handmaid's Tale review Channel 4: Helena Kealey
Offred (Elisabeth Moss) is lying in bed with her knees are stretched apart. The red dress that marks her as a Handmaid has risen up to her belly. A fully-dressed man, Offred’s commander, rhythmically, and lovelessly, has sex with her. His dead-eyed wife looks on from behind Offred’s head. He grunts, once. And then it’s over.

This is the commanders house. Offred (Of Fred) has been stationed here to copulate with the commander and bear him a child. Welcome to Gilead, in what used to be the United States of America, where a revolution inspired by a plague of infertility has transformed the free world into the authoritarian state of Gilead.

Much has been written about the renewed prescience of The Handmaid’s Tale since the election of America’s orange Commander in Chief, who won election without winning the popular vote, threatening freedoms, rights and some cultural norms. There's much talk in the show of not-normal becoming normal with time, which rings an erie bell with contemporary viewers in the time of Trump.

This bank holiday weekend, the first episode in Margaret Atwood's Booker-winning 1985 novel The Handmaid's Tale arrives on Channel 4. It's breathtaking. Brilliant. Startling in its aggression. Even Margaret Atwood is said to be taken aback by the power of the show and in particular a scene in the Red Centre, where fertile women are indoctrinated in the ways of the new order, in which the group of women lay blame and shame a gang-rape victim for her ordeal.

Originally written in 1985 before the fall of the Berlin Wall, Margaret Atwood's dystopian story has since its conception felt relevant and important. Now, more than ever, as abortion rights are repealed and the American president boasts about grabbing female genitals, The Handmaid's Tale is a thing you must read, and must watch. So important has the story become that activists in Texas recently donned the red and white Handmaid robes described in the novel as a part of a protest over two anti-choice bills.

The Handmaid's Tale TV adaptation benefits from a superb cast and creative team, with Atwood herself as consulting producer. Elizabeth Moss (Mad Men) is Offred, around whom the Tale takes shape, alongside Alexis Bledel of Gilmore Girls fame as Ofglen, Samira Wiley (Orange is the New Black) as Moira and Joseph Fiennes (Shakespeare in Love) as the Commander. 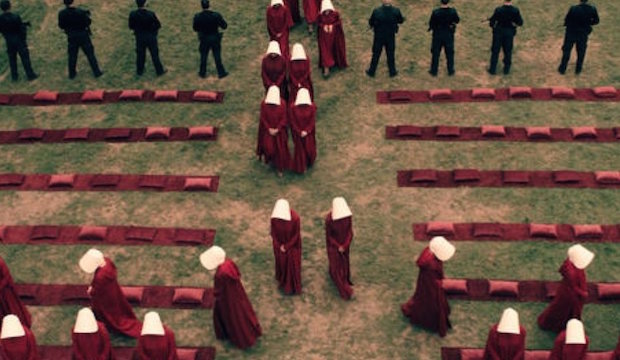 It's an exceptional adaptation following the alarming consequences of state dominance over women's bodies. Women are the property of the state, denied agency over their own bodies, reduced to breeders or barren wives. This is the fictional world of Gilead, but it is also an eerie evocation of contemporary society. Watch it.