Sherlock Season 4: everything you need to know

New trailer, new images and everything you need to know about Sherlock Season 4 arriving on BBC1 January 1st

Episode one is set to air on New Year's Day. Written by Mark Gatiss, Sherlock (the ever glorious Benedict Cumberbatch) returns to our screens, awaiting to see where, and how, the finally definitely dead Moriarty (Andrew Scott) will make his posthumous move.

It may not be Moriaty (but then again maybe it is), but something strange is indeed afoot: a mystery that's baffling Scotland Yard, although Sherlock is distracted by seemingly irrelevant details.

Mary Watson (Amanda Abbington)'s explosive past may be dragged back into the light, there's a madman on the loose and someone is destroying images of the late Prime Minster Margaret Thatcher. Worst of all, there are a couple of disturbing new arrivals: a baby (whose name was announced in the Telegraph this month) -- Rosamund Mary Watson -- and Culverton Smith (Toby Jones) who has been described the the writer as 'the darkest villain we've ever written'. 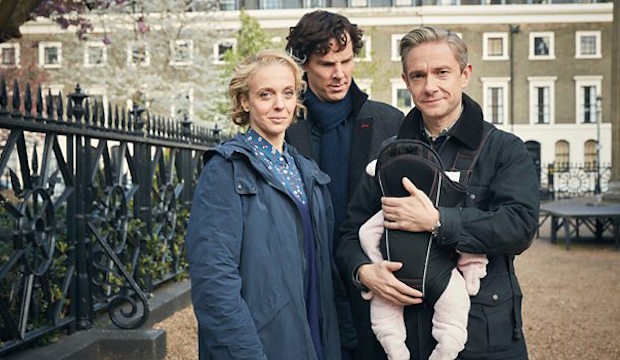