Orange is the New Black season five arrives on UK Netflix this June. And it's good. It's really good

This season, the prisoners of Litchfield Prison are fighting back against the escalating brutality that resulted in one of the most upsetting and powerful character-deaths in the history of TV. The inmates are engaged in a full-scale takeover riot, swarming naked down corridors, rushing the commissary and shooting poison darts at prison guards. It's all kicking off.

Piper (Taylor Schilling) and Alex (Laura Prepon) are making out in bathrooms just to avoid trouble – probably wise, after the pointless rise and ignominious fall of Piper’s criminal gang last season – until they too are caught up in the mayhem.

The two lovers find themselves adopting a pet: prison staffer (now hostage) who, stripped of her outside clothes, shoes, and handbags. is hopelessly vulnerable in the prison. How long will the inmates’ success be able to continue before evil forces shut it down? The fear hangs over everything going on between those doors (padlocked from the inside, for once).

Orange is the New Black began life as a feminist drama about a WASP woman suddenly thrown into jail for drug smuggling. Over its first four seasons the narrative has spiralled beyond Piper Chapman's experience of adjusting from plush living to prison, to tell the stories of fellow inmates and prison officers. 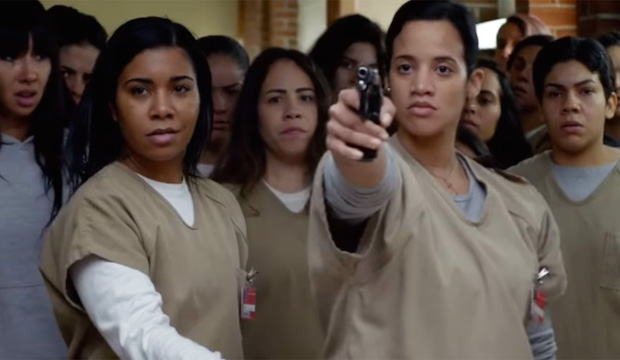 This Netflix show has always been political, but in this post-Trump, post-Black Lives Matter world, the show has never had such an important, soul-nourishing voice as it does now.

As always, the show combines fabulous humour with dark deeds and extraordinary bravery on the part of Netflix. Where else would you see a character dip her fingers into her knickers and smear period blood over her face to stage a violent emergency she needs rescuing from?

Sadly all good things – and riots – must come to an end. Taystee (Danielle Brooks) attempts to negotiate with the guards, but soon the high hopes for a successful social media campaign (marred by the fact that no one actually knows how to use Twitter) is replaced with desperation and Nuremberg-style trials for the guards.

Expect violent extremes and the joy of seeing the Litchfield ladies getting some revenge and celebrating life at the top of the food chain – for as long as it lasts.

Ahead of Orange Is the New Black‘s season five premiere in June 2017, watch the full new trailer above.