So then why is Traitors so tedious?

Feef (Emma Appleton) is the spy assigned by Rowe (Michael Stuhlbarg) to infiltrate the British government and find any hidden Soviets, and she needs to get in deeper. She has tea with Priscilla (Keeley Hawes), pretending she’s been touched inappropriately by her boss in the hope for a transfer to the Cabinet Office. This’d bring her right to the heart of government.

This is Feef at her most interesting. Her performance is persuasive, and watching its power on Priscilla – who proves a strong feminist force in the episode – is enjoyable. 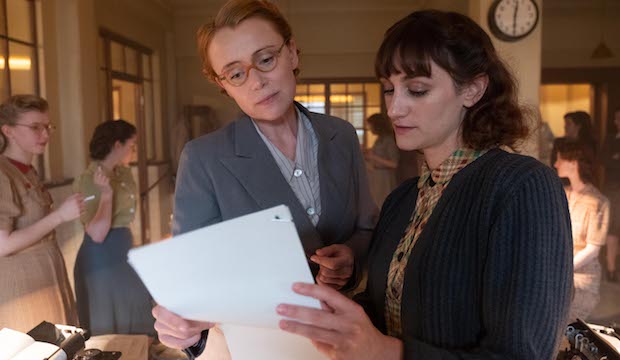 But how is Feef able to act like that? Where did she learn it from? This is one example of how character traits are busily glanced over to accelerate the plot. Even after two hours, it’s still unclear what sort of person Feef is.

But the chief problem of Traitors is its pace, which is way too fast and all over the place. Writer Bath Doran assumes we’ve read plenty of post-war history books, unleashing waves of impenetrable exposition that’s as powerful as a sedative.

Doran and director Dearbhla Walsh never seem to have any fun either – there are no payoffs, no moments of any satisfying espionage success. Traitors is a show to get through, not get involved with.