There’s always been a presence of corruption in police dramas, Line of Duty being the most potent example. But these days, that trope adopts an unsettling relevance to reality. Read the news and you can see that the rogue TV copper, who breaks rules but only to follow justice, is gradually losing its appeal. And believability.

As such, British shows like The Tower veer further from this ‘copaganda’ and proceed with more realistic portrayals (albeit often with a good cop/bad cop balance). Like Stephen before it, The Tower is another stage in a fast and fascinating television evolution. 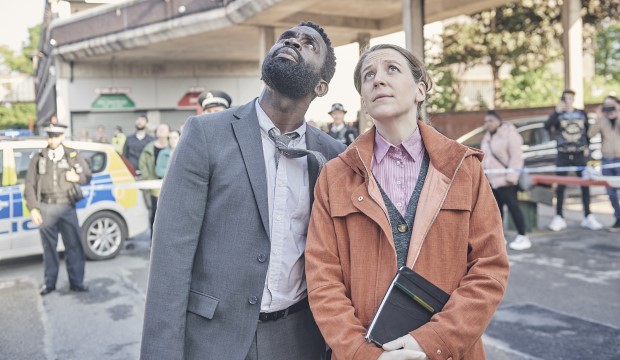 Penned by Homeland writer Patrick Harbinson, the series stars Gemma Whelan – one of those actors who’s always on a show somewhere, but is best known for Game of Thrones – as DS Sarah Collins. She’s in Special Investigations, called to a crime scene at the base of Portland Tower in southeast London.

You see Sarah’s alienation from the rest of the police as she’s initially refused entry. Once she's allowed through, she sees PC Bradley Matthews (Nick Holder) and the 15-year-old Libyan refugee Farah Mehenni (Lola Elsokari) lying dead in thick pools of blood, having fallen from the top of the tower. Only a five-year-old boy and Bradley’s partner PC Lizzie Adama (The Haunting of Bly Manor’s Tahirah Sharif) witnessed the incident.

The blame from the other officers is immediately placed on Farah, with the department going down a dubious ‘screw loose’ route. That mentality is bolstered by Carrie Stoddard (Sally Scott), the neighbour who keenly observes the Mehennis from her window. But Sarah sees something different, especially given Lizzie's strange behaviour.

The drama jumps back to nine days before the fall, ambiguously examining Lizzie and Bradley’s partnership. Thankfully, Harbinson allows the present to take place first, thus avoiding the TV trend of opening with a cliffhanger scene from a different time. The non-linearity provides intelligent intrigue instead of lazy writing. 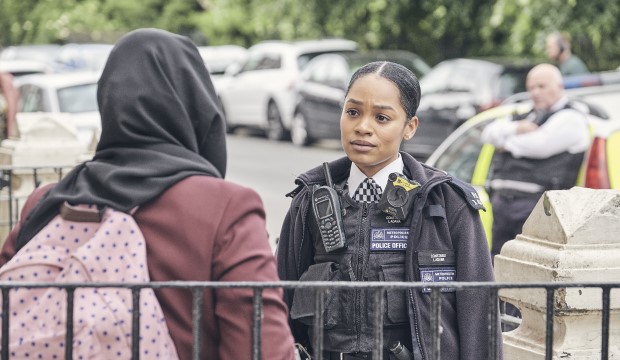 Despite the waves of scrutiny that lash at Sarah – her scepticism met with defensive tremors – she never wavers for a second. She sees those antagonistic glances, mostly from men, and always keeps her cool. When asked by her patronising superior, ‘Do you ever wonder why you’re still a DS, Sarah, at your age?’, she grins and retorts: ‘Because I can’t tell jokes to blokes in bars?’

The only time she cracks is in private. The rest of the time, she’s mentally sifting through all the facts and doesn’t wait for others to reach the right answer. She’s a thrilling force, a one-woman army, making The Tower’s release on consecutive nights so necessary.

The whole situation is a deviously tangled mess, facilitated and kept under wraps by systemic forces. Only the first episode was available to review, so the true extent of the conspiracy and its implications haven’t yet been revealed to this critic. But the triad of racism, sexism and corruption appear to be spinning that web. And although showing police corruption is hardly new, there’s a certain courage in dismantling it.

The Tower airs on three consecutive nights from Monday 8 November to Wednesday 10 November at 9pm on ITV.