In Les Miserables episode 3, Jean Valjean (Dominic West) attempts to answer for his previous crimes while fulfilling the wishes of the dying Fantine (Lily Collins)

After instructing the batty Madame Victurnien (Kathryn Hunter) to bring the dying Fantine’s (Lily Collins) child to her, Jean Valjean (Dominic West) rides to the Arras Court House to answer for his crimes from a previous life. But he manages to escape prison and the clutches of his nemesis Javert (David Oyewolo), returning two years after Fantine dies to take care of her child Cosette (Lia Giovanelli). 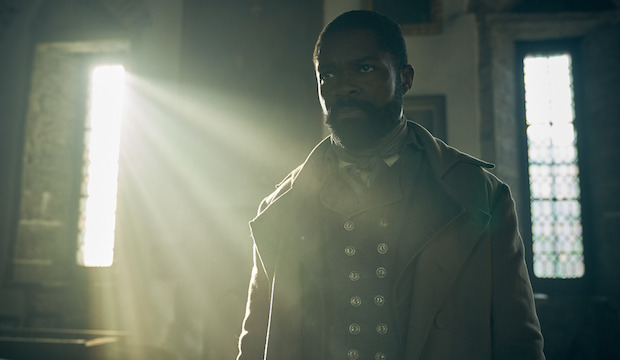 The veteran period-drama writer Andrew Davies is brave to have so much happen in the opening fifteen minutes, though perhaps it would’ve suited better at the end of episode 2. But even given that, Fantine is devastating to watch. Without the musical numbers, there’s a stronger reality brought to her suffering. Although the series doesn’t experiment much in modern techniques (aside from the blood red title text) like ITV's Vanity Fair did, Collins’ naturalistic anguish is absorbing to behold.

Her downfall is still within the bounds of melodrama, but not in an overly operatic way like the musical. When Fantine sees Valjean and pleads with him, it’s like the character’s reaching toward the screen, like she’s begging all of us to save her…

… And all of that happens in the first fifteen minutes. Victor Hugo didn’t call it Les Miserables for nothing. 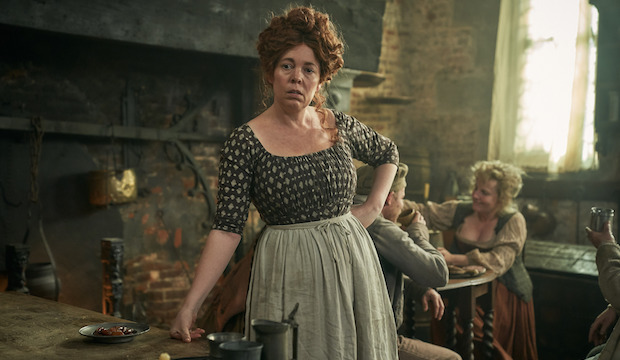 Jump forward two years and Valjean has reinvented himself again with pockets filled with francs (like his rise to mayor, this part of the story is left as a blur). He finds Cosette and frees her from the cruel inn run by Madame and Monseiur Thenardier (Olivia Colman and Adeel Akhtar).

Prior to his arrival, Madame Thernardier treats Cosette like a bad dog – jeering at her, calling her ‘Little Toad’, and belting her in front of the locals. These scenes belong to Colman, who’s at her most venomous here – even more so than her recent outing in The Favourite. It’s only a shame that we don’t see more of another side to her, as seen previously by way her husband’s patriarchal abuse.

Episode 3 is entertaining and miserable, much like the series so far, though its best scenes finish at the start. The parental relationship between Valjean and Cosette holds the rest of the episode, and she grows more engaging when she realises her freedom. We look forward to watching their relationship develop.