Top of the Lake: China Girl is a worthy companion piece to The Handmaid's Tale – an overtly feminist series starring Elisabeth Moss

Well, it was probably the best thing that Kidman was in at Cannes – perhaps more interesting than The Beguiled, more successful than The Killing of a Sacred Deer, and simply not the trainwreck that How to Talk to Girls at Parties apparently was. But, while Kidman is very good in it (and we’ll get to that), it’s also worth talking about how Elizabeth Moss is increasingly becoming a gold standard for whatever material she’s in.

As well as Top of the Lake, Moss also had a major role in Ruben Östlund’s The Square, which won the Palme D’Or; and as soon as Cannes had finished, Moss appeared on UK televisions in The Handmaid’s Tale, a show that has quickly been described as one of the best for a while. It’s hard to tell whether Moss has a knack for picking superior material, or whether she elevates whatever she’s in to top-tier status. She’s a quiet, controlled actress, and her performance always seems perfectly symbiotic with whatever it appears in.

In the sophomore season of mystery series Top of the Lake, Moss returns as Detective Robin Griffin. Where season one saw Griffin solving a disappearance case in her remote New Zealand hometown, season two has her back in bustling Sydney, an overheated metropolis with a sex-trafficking problem. ‘China girl’ is how one of the city’s Asian sex workers is referred to – but only after her body has been packed into a suitcase and bundled off a cliff.

When this grisly luggage washes up on Bondi Beach, Griffin assigns herself to the case. It’s the kind of crime that she dealt with previously, and the kind of crime that Top of the Lake deals with as a series: Campion’s procedural drama digs right into the seamy and squalid, churning up a surface of placid respectability to find a system of sexual abuse and control underneath. It is a show that is entirely upfront about the ways that women can be subjugated by men, and will make a fascinating companion piece to The Handmaid’s Tale. 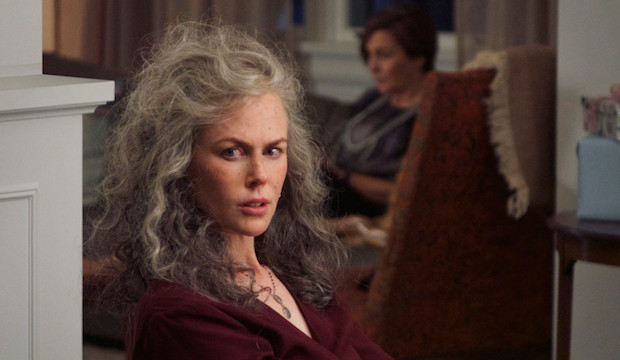 Griffin was raped at sixteen. It’s an event that gave her a strong sense of empathy with the twelve-year-old victim of Top of the Lake’s first season, but it’s the more tangible fallout of the rape that comes into play in season two. The child that Griffin gave away for adoption is now a teenager called Mary (Alice Englert) who happens to be besotted with ‘Puss (David Dencik), a slimy older man who teaches English at the brothel where ‘China girl’ worked.

This is a pretty hefty coincidence, but it allows Campion to deftly blend two different social spheres. The violent underworld of rape and slavery, in which a young woman can seemingly evaporate without comment, becomes intimately linked to the suburban world of middle-class propriety – a cross-over that occurs most strikingly at a gruesome dinner where Mary introduces Puss to her parents.

Kidman plays Julia, Mary’s adoptive mother, who is amiably divorcing her husband after falling in love with a woman. Julia travelled to England to study feminism under Germaine Greer, and Kidman’s hair has been teased into a steely Greerian barnet: a card-carrying, rigorously theoretical, old-school feminist, Kidman plays her with all the requisite forthrightness. Julia’s clash with Puss at the car-crash dinner is one of the best moments in these first two episodes.

These episodes are tantalising, and not especially because of the plot – we see the characters disposing of the victim’s body in the first scene, and it’s assumed that Griffin will eventually identify them. No, the real sense of anticipation is generated by Campion’s thrilling mix of themes and scenarios, and the possibilities of how they will develop. Top of the Lake: China Girl may be shot like a traditional cops ‘n’ murderers show, but its main appeal lies in the intriguing way it handles its ideas.

Top of the Lake: China Girl will air on the BBC Thursday 27th July 2017. All episodes will be available immediately on iPlayer.