The Killing of a Sacred Deer film review ★★★★★

The Killing of a Sacred Deer prides itself on being cinematic Marmite, but we were just a little disappointed

There’s an implicit challenge in these reviews. Can’t you handle it? they ask naysayers. Don’t you like being made to feel uncomfortable? Is it too much for you? Which is all well and good – but what if you remain unprovoked, unchallenged? What if The Killing of a Sacred Deer almost puts you to sleep?

The thing is, Lanthimos’ style has become shtick. Apparently his characters must all adhere to the director’s patented affectless mien. They are at once glazed and over-literal. They are essentially lobotomised. The actors are there to deliver lines rather than performances: they speak as if quickly prompting other auditioning actors, and it’s about as fun to watch.

This method made perfect sense for Dogtooth, a straight-up masterpiece of a film about the imprisoned adult children of a Josef Fritzl-esque tyrant: those were warped characters, adults with the minds of children. But there seems to be no earthly reason for Lanthimos to employ this faux-naïve register in his new film, other than that it’s the Yorgos Lanthimos ‘thing’ now.

The Killing of a Sacred Deer concerns successful heart surgeon Steven Murphy (Colin Farrell), who has struck up a strange relationship with an adolescent boy called Martin (Barry Keoghan). He meets Martin in isolated areas, gives him gifts, and enquires after his health.

Steven is cagey to his wife (Nicole Kidman) about these meetings, especially when Martin starts turning up at the hospital unannounced, but he still invites him over to meet his young son and daughter (Sunny Suljic and Raffey Cassidy), the latter taking a shine to the gaunt stranger.

Steven’s relationship to Martin eventually unravels queasily into something horrific involving both protagonist’s unfortunate families, but the early ambiguity is intriguing – or it would be, if the shades of guilt, obligation, and fear were allowed to come through in the performance. As it is, the mandatory affected stiffness and asexual goofiness denies these scenes much nuance.

There are signs that Lanthimos was trying to do something Kubrickian – Stanley Kubrick famously made his actors repeat their lines over and over until their delivery was suitably uncanny – but the more immediate resemblance is to quirky ’00s comedies like Napoleon Dynamite.

Indeed, the cross-eyed and seemingly damaged protagonists get several laughs for their bluntness and lack of social graces. But they don’t inspire fear, sympathy, or anything else but faint exasperation.

This isn’t the only problem. Lanthimos’ film also suffers from a laughably overwrought score, and an ending that can only be described as a Woody Allen parody of Sophie’s Choice. But it’s the stylised babyishness that’s really eye-rolling, and it leaves The Killing of a Sacred Deer about as dangerous as a Wes Anderson film. 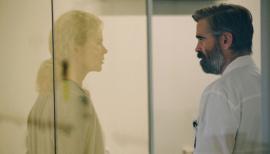 Screening of The Killing of a Sacred Deer, BFI Southbank