2 CW readers are interested
The Beguiled film review 4 The Beguiled film review Sophie Joaman
Perhaps, like us, you saw the trailer for The Beguiled and immediately wanted to see it based on one line screamed by Colin Farrell: ‘WHAT HAVE YOU DONE TO ME, YOU VENGEFUL B*TCHES?’ The reason to see Sofia Coppola’s new film wasn’t just to find out what the vengeful b*tches had done to poor Colin – it was to see the kind of gloriously campy and gothic movie that such dialogue seemed to portend.

The bad news is that the line isn’t actually in the movie, at least not in one piece (in the trailer it’s been edited together from two separate utterances); the good news is that The Beguiled is more or less the kind of film that the bowdlerised line promised. No need to call the ASA just yet.

Farrell plays American Civil War soldier John McBurney, a Union deserter hiding in the woods of rural Mississippi. His leg has been shattered in an explosion, and things are looking bleak until a young girl called Amy (Oona Laurence) discovers him propped up against a tree. Initially frightened of the bristle-faced ‘blue belly’, Amy helps him back to the all-girl boarding school where five students and two teachers are waiting out the war. It is, of course, the Christian thing to do.

They’re fairly big on religious duty at the Miss Martha Farnsworth Seminary for Young Ladies. The prim Martha Farnsworth herself (Nicole Kidman) has reservations about bringing ‘the enemy’ into their palatial Deep South stronghold, but her resolve to help those in need is stronger. Anyway, Corporal McBurney is at their mercy: badly injured and, at first, unconscious.

When he wakes up, he manages to put the Seminary’s ladies at ease. He’s a charming Irishmen, a mercenary with no interest in the deeper loyalties of the conflict, and he’s grateful for the care he’s received. Indeed, the warm feeling is mutual: everyone is grateful for a break in the monotony of life inside the mansion. He gives them a reason to dress nicely for dinner, and he is rewarded with meaningful glances from comely tutor Edwina (Kirsten Dunst) and nubile 18-year-old Alicia (Elle Fanning). Even Miss Farnsworth can’t help batting her eyelashes. 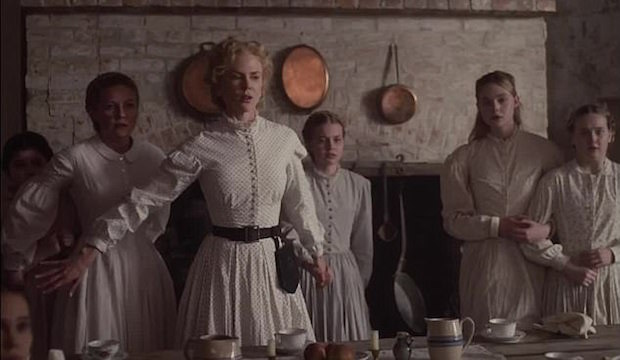 This can only end one way: badly. And so it goes, with McBurney’s natural roguishness providing the tipping point for the women’s sexual frustration and romantic longing. As the saying goes: b*tches be vengeful.

That really does seem to be the enduring message of The Beguiled. On a first viewing, it doesn’t seem to be ‘about’ anything other than how enjoyably punitive Nicole Kidman can be, and the film lacks the lasting emotional resonance of Lost in Translation. A second viewing doesn’t have much appeal (so much of the story depends on surprise).

That said, The Beguiled had the audience at Cannes laughing and clapping throughout, us included. With so many ponderous and overlong films screening at the festival this year, Coppola’s short, punchy melodrama is a welcome relief.