If it was Sherlock that launched him, then playing the part of Patrick Melrose will crystallize Cumberbatch’s particular brand of public school charm. The new five-part Sky Atlantic series is practically written for him; indeed he listed his only two bucket list roles as Hamlet (ticked off with the 2015 Barbican production) and Patrick Melrose.

The character is an autobiographical projection of writer Edward St Aubyn, who chronicled the abuse, excess and decay of his aristocratic family over a series of five novels: Never Mind, Bad News, Some Hope, A Mother’s Milk and At Last.

Each is startling in its clarity and candidness. St Aubyn slices through generations of snobbery and stiff upper lips to uncover childhood trauma and its repercussions, all in prose so precise it sears in your mind.

The story is told in a series of close up moments, spanning lonely Provençal summers in the 60s, hedonistic 1980s New York, London in the noughties and back to the South of France.

David Nicholls (One Day) re-imagines the quintet of books for the screen masterfully, capturing the tone rather than getting bogged down in detail. We begin at book two, Bad News, with a telephone call informing Patrick of his father’s death.

The news is met with a glassy-eyed grimace that, it soon becomes apparent, is more to do with intoxication that grief. A droopy smile flickers over Patrick’s face as he politely acknowledges the bereavement. It’s the beginning of a drug-induced delirium: he shoots up, blue blood saturated with heroin, before flying to New York to collect his father’s remains.

Cumberbatch drawls through an interior monologue, embodying St Aubyn’s distinctive prose, as he narrates the agony of a smack comedown in a traffic jam while writhing around in the back of taxi.

It’s a tart, ironic voice, buzzing with repressed memories and media white noise. This contrast – the dizzying excess of substances against the emotional incontinence – is what makes Patrick’s plight so compelling. Even the most wretched moments are soaked in wit. 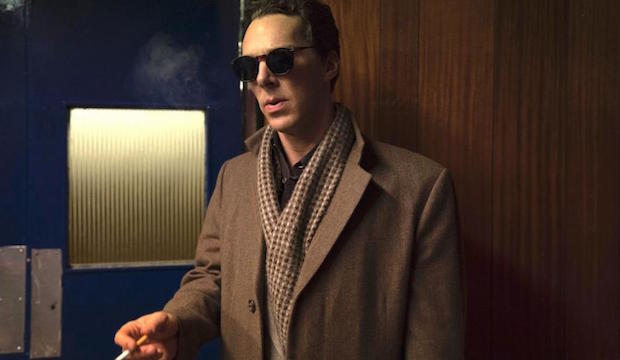 Flashbacks to the cruelty he endured as a child stymie Patrick’s attempts at total obliteration. We watch him ricochet from funeral parlour to gentlemen’s club to hotel room, via a few junkie hovels, in various states of wildness. Attempts to traverse a restaurant on a quaalude high are outrageously funny – all puddly limbs and scrambling hands. But further down the spiral of self-destruction a strained date, clumsy groping and desperate pleas for companionship are repulsive.

Yet this is not a story that demands your sympathy or wallows in its own bleakness. There’s too much much sharpness, vibrance and charm for that. The barbed humour is part of the toxicity, just as Patrick’s attempts to forget his alcohol-addled mother and bullying father trigger yet more inebriation and cruelty.

Over the next four episodes we'll look back to the brutal childhood that still haunts Patrick, before following his imperfect attempts at excavating a life from the ruins of his family.