Succumb to Meghan Markle mania and start watching Suits. Here's everything you need to know before binge-watching the whole series. No spoilers 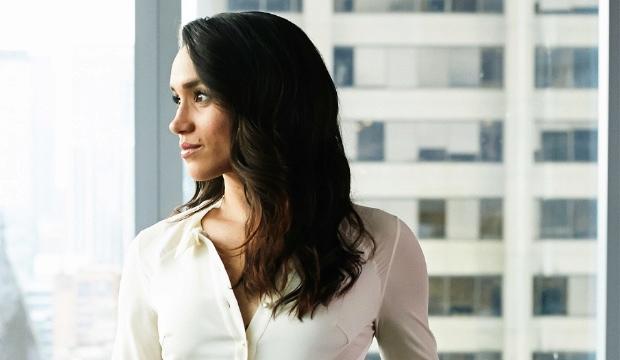 Why you need to get into Suits right now
Once upon a time, whenever the world was in chaos, we Brits turned to our TV screens for a nice bit of escapism. Obviously we still can, but as Meghan Markle’s final few Suits episodes air on Netflix less than a month before the Royal Wedding, now is the time to indulge in some blissful escapism whilst ensuring you’re utterly plugged into historical current events. Bingo.

Suits season seven returned to Netflix after its mid-season break, and on Thursday Harry's financée appeared as the sassy lawyer Rachel Zane in a double bill that wrapped-up the season. We don't want to give away what happens for those who haven't seen it, but instead, our wedding gift to you is a list of all the reasons this should become your guilty pleasure and Netflix binge-watch.

Enter this fictional NYC law firm, full of insufferable Americans (the self-satisfied kind only hire from Harvard, you know), all one-upping each other with pop-culture references, telling strangers how attractive they are, and taking themselves all very seriously – despite the ludicrous premise of the show.

Young college drop-out and massive stoner Mike Ross (Patrick J. Adams) develops a bromance with his legal mentor – the walking ego and senior-partner Harvey Specter (Gabriel Macht) – and proves himself to be the smartest lawyer in the building, despite never actually having gone to law school.

In place of a Harvard degree, Mike slips through the recruitment net using his wit, charm and his superpower: a photographic memory. This is Good Will Hunting meets Ally McBeal, without the humour, and a big slap in the face to your mum's promise that hard work and due diligence build a man.

Is Suits complete nonsense? Yes of course. But it's brilliant, unstoppably compulsive nonsense.Suits is a temple to the Mad Men by-the-seat-of-your-pants and fake-it-till-you-make-it school of inventing stuff on the spot, like all real winners.

TRY CULTURE WHISPER
Receive free tickets & insider tips to unlock the best of London — direct to your inbox
If you’ve never seen Suits before – and even if you have – here is a reminder of why you should settle down and binge seven seasons quick, before Meghan gets hitched to Harry. 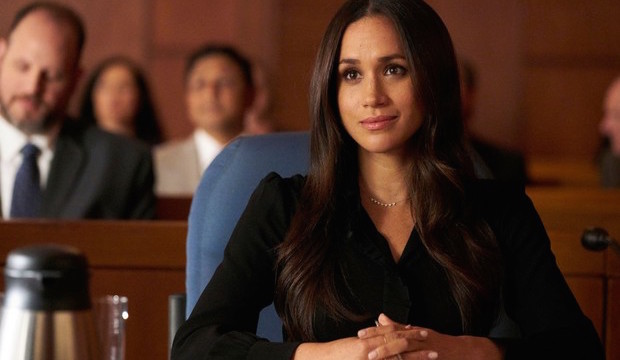 Those clever Suits writers predicted wedding bells for Harry and Meghan before the rest of the world, and so had some time to plan how to convincingly write her out of the show – rather than just have her disappear down a manhole or under a bus at the last minute.

We know what happens to poor old Rachel / Meghan, but we don't want to spoil it for you. Will it be death? Will she emigrate? Will love carry her away? Perhaps the writers will leave the door open for her to come back if this whole Princess thing doesn’t work out?

Watch Suits and become that nauseatingly smug friend entertaining the room who, on the 19th May, is filled with insights into Markle’s performance as an actress. (Practice with us now. Sip your pimms and say: ’mmm, quite pretty, but you know she really was terribly wooden in Suits.’) We can see the quiet nods of approval from here.

That doesn’t mean there isn’t plenty of escapism. Suits bares no resemblance to reality whatsoever 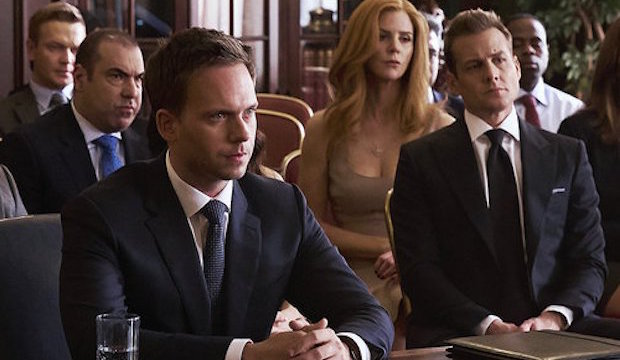 Google ‘is being a lawyer anything like Suits’ and internet will attempt to slap you in the face. There has never been a law firm like this. Everyone is beautiful, smart and perfectly polished at all times with only one of three facial expressions: outraged, seductive or ‘filled with self-righteous determination’.

Because Suits is actually a ridiculous soap opera without any subtext, people also only speak in raised or silky sexy voices – all whilst using one of those three facial expressions. Expect to hear people repeatedly say: ’what the hell is this’, and ‘you kissed him?’ and ‘get out of my office’. All with a straight face. Amazing.

Everyone is a vicious psychopath 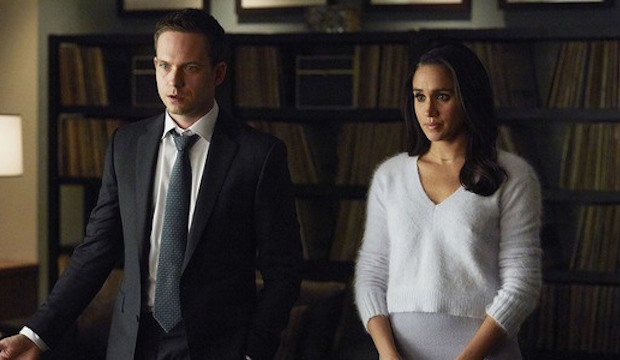 Plots, backstabbing, cruelty and the endless draw of a courtroom bust-up. There’s not a single cast member you could have a cup of tea and a chat with, without something awful happening to you. Think House of Cards – except everyone thinks they’re President Underwood. Actually, with the 'family first' storyline that wrapped up season five, it's probably more like gangster TV show. This is Peaky Blinders, with razor sharp barbs instead of razor caps. 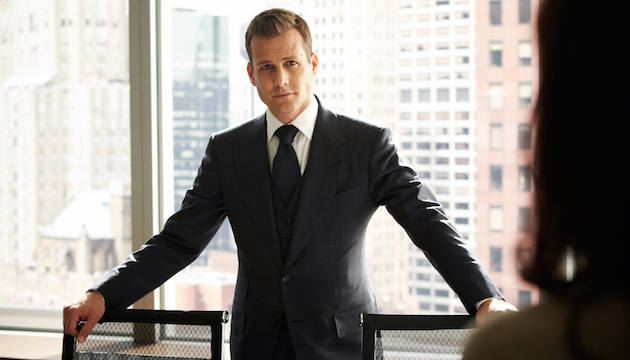 The spiky-haired, Bart-Simpson look-alike Harvey Specter (Gabriel Macht) is king of the ‘I’m secretly fuming’ facial expression. But in-between staring furiously at colleagues, he’s handing out nuggets of wisdom like sweeties from the child catcher.

Looking for a life coach to help you ‘get your shit together’? Harvey Specter is your man! ‘When it feels like someone has twisted a knife in your gut, I want to twist one right back.’ Obviously, he's motivational quotes are mostly violent.

Everyone is permanently having sex with everyone else 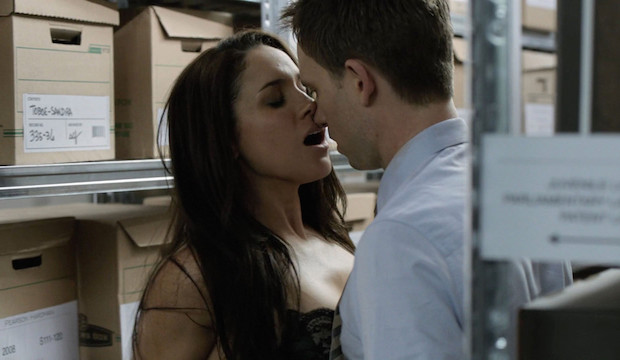 'I've been up all night! I need enough caramel lattes to fill a swimming pool', scream all the characters whilst 'looking exhausted' through a full face of perfect make-up and professionally blow-dried hair. When do they all have the time to look so beautiful? It must be in this same strange alternative universe where everyone is having sex with one another all the time. Watch the cast shack up in hotel rooms, conference rooms, stationery supply closets. It can be challenging keeping up with who fancies who and who is sleeping with who, so do try to keep up. 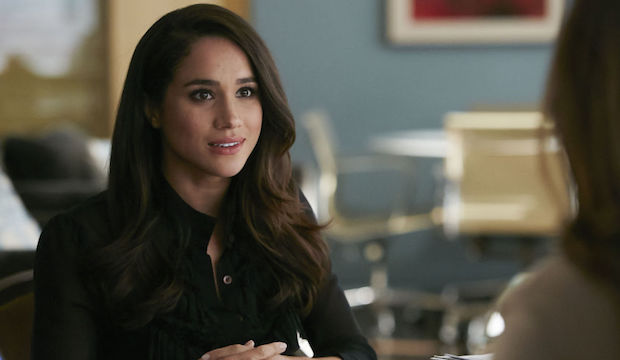 The first time we meet Rachel, she's giving Mike Ross a tour of the law firm and presumptuously telling him not to hit on her, even though he isn't. Her character, we're informed, is hot. Very hot. The hottest. Bear with us though, because soon we're soon offered a person with a little more depth to her hotness, who turns out to be sassy and confident by turns, as well as defensive, vulnerable, irrational and sometimes angry. Who knows what she'll be like as a Princess, but on balance we think Meghan's quite a good actress.

So grab a commemorative plate and a caramel latte and settle in for seven seasons of your new guilty pleasure. You've only got a month to watch it in, so you'd better get going now.