The Dumb Waiter, Old Vic – live and In Camera

The story follows Ben and Gus, two hitmen awaiting details of their next assignment in the basement of a former café. Things take a spooky-cum-farcical turn when the physical dumb waiter starts bombarding the pair with mysterious food orders, but it's the final twist that renders the play a masterpiece.

The production is in the hands of People, Places & Things director Jeremy Herrin, who returns to the Old Vic following his critically acclaimed, star-led revival of Arthur Miller’s All My Sons in 2019. Ben and Gus are portrayed by David Thewlis (the Harry Potter films, I’m Thinking of Ending Things) and Daniel Mays (The Caretaker at the Old Vic, Red Lion at the National Theatre) respectively.

As a sign of commitment to its digital-first approach, The Dumb Waiter is also being made available to stream online as the sixth production of the Old Vic’s In Camera series, which has included a socially distanced revival of Duncan Macmillan's Lungs, Brian Friel’s Faith Healer and Stephen Beresford's Three Kings – each bolstered by a famous cast.

In a statement about the reopening, artistic director Matthew Warchus described the theatre’s approach to welcoming back live audiences as ‘supremely informal’. The theatre has also issued a note to those booking in-person seats that their view might be blocked by camera recording the production on the night.

The Old Vic isn’t the only theatre to revive The Dumb Waiter in recent times. Hampstead Theatre, where the play premiered in 1960, staged a 60th anniversary production back in December – a run that was, alas, cut short when London was hauled into tier three before Christmas.

On a new stage and in a fresh set of hands, Pinter’s enduringly entertaining two-hander looks set to delight, shock and grip us all again. 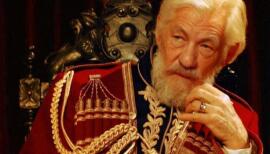