Showstopper! The Improvised Musical, The Other Palace Theatre review ★★★★★

Showstopper! The Improvised Musical brings spontaneous song and silliness to the West End's The Other Palace

This improvised musical has been touring for many years, astounding fans along the way. Having won a following with regular stops at the Southbank's Udderbelly Festival and run at the St James Theatre and Lyric Theatre, Showstopper! then became the first improvised show to score a West End run. Now it's back for 2019 with a run at The Other Palace from January to March.

To the uninitiated, a spontaneous show sounds like a disaster waiting to happen. Big shot musical theatre producer 'Cameron' (cue knowing titters) phones to say he needs a new musical, pronto. And so it is up to the audience to come up with setting, musical influences and, most hilariously, title. Expect silliness and punning a-plenty as, based on the whims of the audience, seven seasoned performers make up a musical. 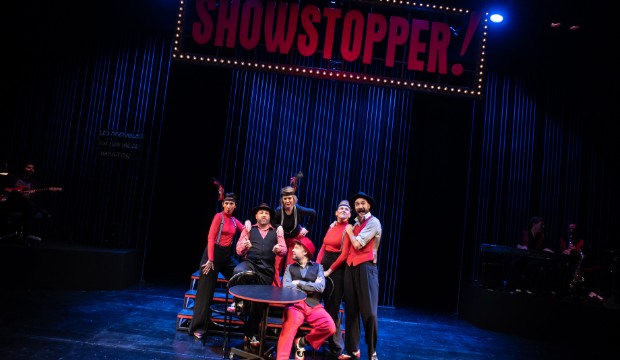 We ended up watching a lesbian love story set in Nashville. Audience suggestions were whittled down from Hogwarts to Wormwood Scrubs, before it was settled on a Tennessee setting. Then, from shouted out requests, we decided that the show should have musical numbers in the style of Hamilton, My Fair Lady, Come From Away and Book of Mormon. Then the audience took to Twitter in the interval to decide how the second half played out.

In the wrong hands it would be agonising watching, but the sheer talent and stupendously quick-wits of the Showstoppers performers create intricate, all-singing, all-dancing musicals time after time. And, while it pays to be a musical theatre fanatic who can pick up on the in-jokes and references, the on-the-spot premise is silly enough to amuse anyone.

The resulting production might not quite have the soaring hitis of a Lloyd Webber show, but the quality and enjoyment factor is always high. Best of all, with fringe-priced tickets (rather than three figure West End prices) you can come back again and again and always have a different experience.