Woody, Buzz, Bo Peep and friends are back in Pixar's most soulful film in years – Toy Story 4 delivers enough love and laughter for a lifetime

The questions that followed the announcement of a fourth film in the Toy Story franchise – the whys, the hows, the ‘what more can you possibly do’ – are immediately replaced with far braver ones in Pixar’s most soulful film in years.

What, if anything, lives forever? What does it take to know your place in the world and accept the purpose you must fulfil? How do you give back the love you’ve so longed to receive your entire life?

The third Toy Story film saw a ceremonious hand-me-down from Andy to Bonnie, a little girl with an enormous imagination set to offer Woody, Buzz and all their friends a new life. But there’s trouble in paradise, when, on a lonely first day of kindergarten, Bonnie makes a new best friend.

This is Forky, the neurotic toy Bonnie brings to life against his will. A single-use plastic body that’s ready to snap, pipe cleaner arms made to bend. Play-doh features waiting to be squashed. How many times can you restick a googly eye before resigning to the fact that some things are destined to be disposable? Logic has no place in a child’s heart, as nothing could matter more to Bonnie than this self-doubting spork. 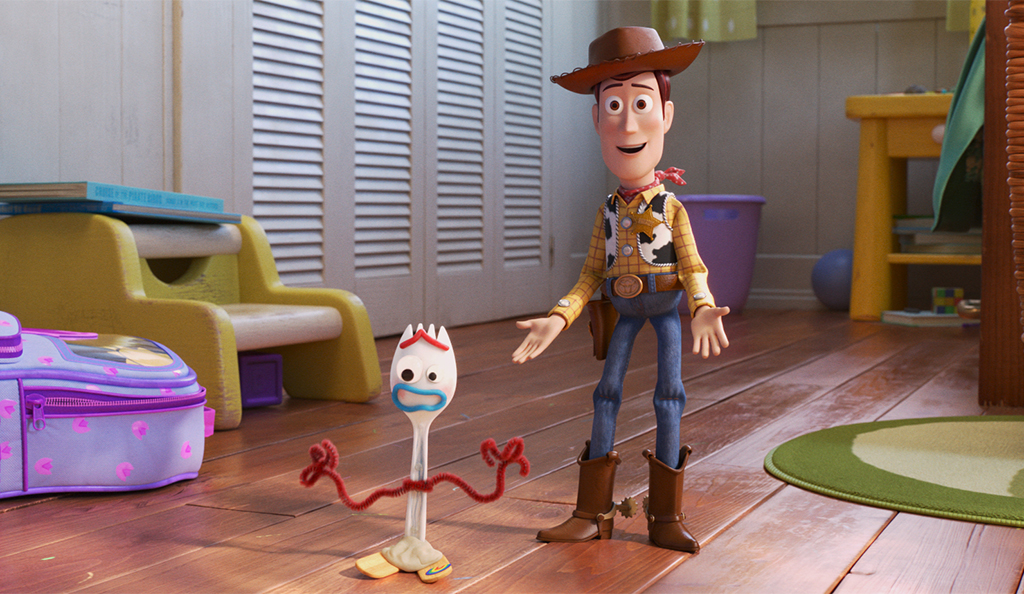 His arrival raises an existential debate with comic theatricality, but it becomes clear that these anxieties aren’t new. Forky’s education merely reignites the debate – while a future with Bonnie once seemed like the perfect open-ended result, these toys never did come to terms with their responsibility and reasons for existing.

This is about more than ownership, as the relationship between a kid and a toy here shows a back and forth between the one who cares and the one who is cared for, and so resonates with parents, children, lovers and loners of all ages.

Woody reaches a crossroads on a road trip, when, as always, the mission is to find a missing toy – Forky panics, and flees. But here, the task goes deeper: the more profound undertaking is to understand why home must be where the heart is, while acknowledging how the world might just need your love elsewhere. 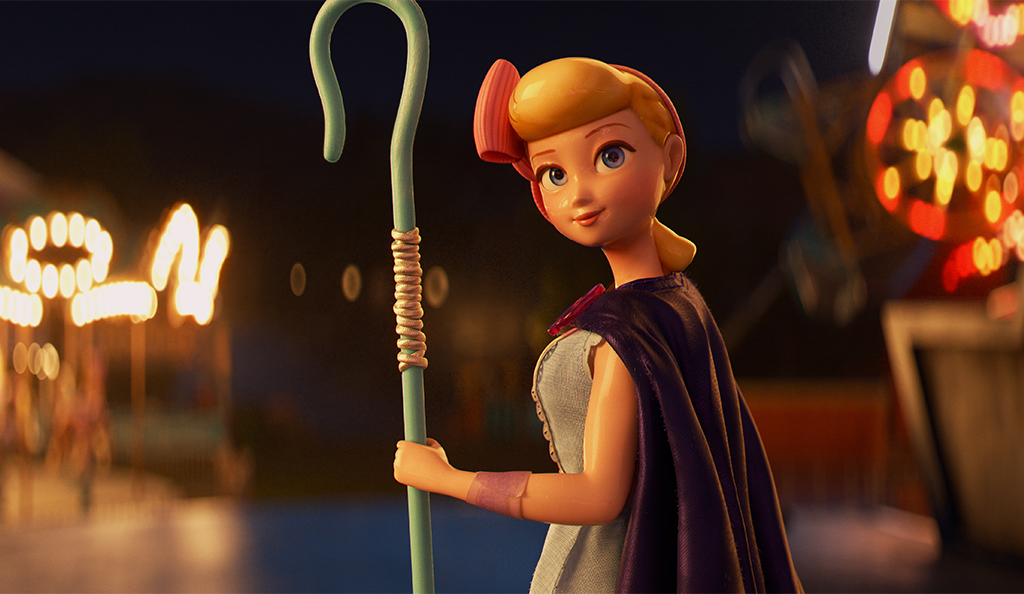 Bo Peep returns after many years away, with a reinvigorated agenda

On his journey, our cowboy takes on the role of a parent, a friend, an adventurer and also gets to be a lover. The apex of his storyline with Bo Peep is rich and rewarding, as it’s a tender and truthful one that has been building for over 20 years.

Bo anchors the film with unparalleled heroism and sensitivity, as her wisdom and wit bind toys old and new, good and bad, with a strength that brought us to tears.

But there’s so much laughter too: the script gifts bitesized comedy sketches, a Canadian daredevil that Action Man could only dream of, and enough visual gags to make this compete with the very best silent animated movies from way back when. 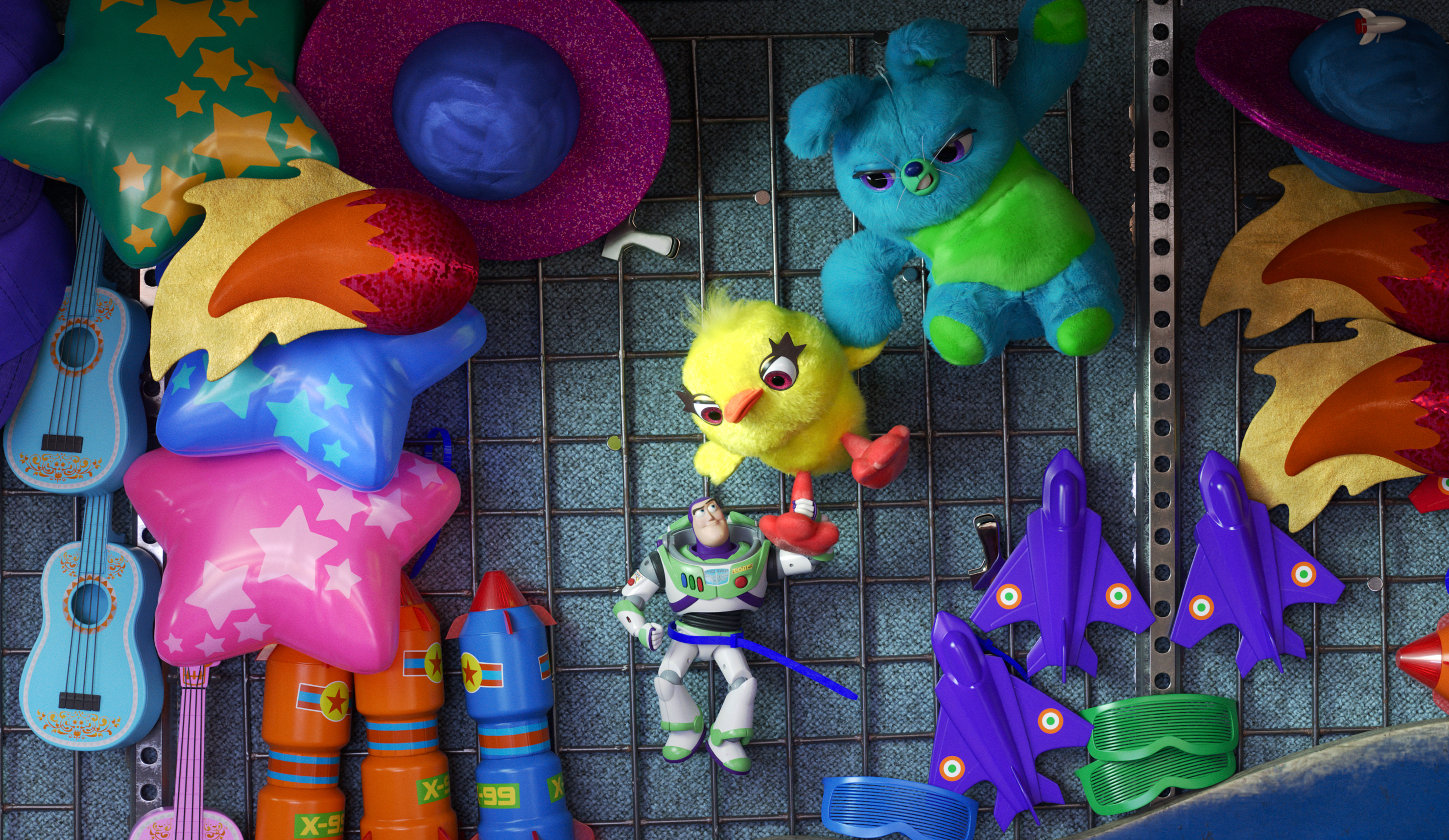 It might be the sequel no one asked for, but Toy Story 4 delivers a surprisingly opportune occasion to question just how sophisticated the contemporary anxiety of the ‘arrival fallacy’ has become: the belief that when a goal is reached, you will have to be happier.

When Woody finds Forky, he’ll be happy. When Bonnie is reunited with Forky, she’ll be happy. This then motivates our antagonist, the ceramic doll Gabby Gabby, to follow her own truth as well – when her voice box gets fixed, she will finally be loved.

But a fallacy relies on its brokenness, and so things are more nuanced. What transpires is a complex, wisened contemplation of a simple existence lived for a greater purpose. The film’s arrival fallacy allows the emotional climax to be felt strongly, balancing sparkling humour with the rewards of enduring loyalty that has supported a lifelong adventure.

After so many years of friendship, adventure, imagination, and ambition, the only place to end had to be on top of the world. ‘Was it as wonderful as it sounds?’, Gabby tentatively asks Woody. From where we’re standing, now alone again, but by no means lost – it completely was, every last minute of it.