Johnny Flynn and Kit Harington play a pair of estranged brothers sucked into a Pinteresque power struggle and taunted by the legacy of the wild west. Matthew Dunster directs a ominous production, which uses lighting, sound and destruction to render the domestic backdrop increasingly disorientating.

The 1980 play, with its increasingly surreal, murkily funny dismantling of the American Dream, still smarts in the Trump era (and perpetuates theatre's preoccupation with the plight of white middle class men). We see capitalist America as a condo with all the mod-cons. The only traces of the untamed desert beyond are in coyote calls and the thrum of crickets.

After winning global fame as the moral hero Jon Snow in Game of Thrones, Kit Harington begins the play as benign, law-abiding Austin. Suave in crisp chinos and a polo shirt, he’s an Ivy-League-educated success story who has sold enough screenplays to fund a house and family in the north. He has returned to his mid-western childhood home to housesit. A mustachioed Harington taps away at a typewriter with self-contained stillness. 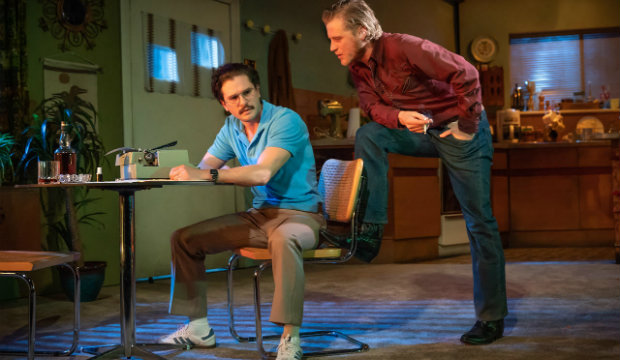 This productive serenity disappears in flash of dark and light with the arrival of an intruder. Lee is the opposite of his brother; and lithe, lanky blond Johnny Flynn is a striking foil for Harington’s stocky darkness. Flynn brings an insidious charisma to lawless nomad Lee. His restless energy fills the stage and his sprawling stories of desert life dominate the dialogue. In the swing of a golf club or the scrunch of some paper, Flynn makes violence feel palpable, while manipulating Lee with bargaining and bravado.

The brothers’ differences fuel a fascination with each other’s lives: the corporate dream versus macho myths of the American frontier. But Shepard’s script delves beyond abstract ideals to the tangled psychology between two men. Fuelled by Budweiser and Jack Daniels, Lee and Austin attempt to emulate and overtake each other – with all the futility and gusto of two cowboys on a chase through the wilderness.

And it's in this overlap between the two brothers that the performances really draw you in. Harington captures Austin’s increasing mania with a frenetic comedy, approaching crime with a conscientious need to please. But it’s Flynn’s Lee who commands, directs the dizzying spiral of destruction, and leaves us feeling thoroughly unsettled.