Poldark's Aidan Turner makes his West End debut as a crazed, cat-loving terrorist in Michael Grandage's revival of The Lieutenant Of Inishmore

With his (tight) shirt firmly on and no hint of the earnest heartthrob, Turner prowls the stage with a gun in each hand in this uproarious revival of The Lieutenant Of Inishmore.

The 2001 satire by Martin McDonagh – multi-award-winning writer behind hit films and plays including Seven Psychopaths, The Pillowman and Hangmen – is bitterly funny and unashamedly violent. Some theatre companies feared that staging it would threaten to unsettle the peace in Ireland. Even those familiar with McDonagh’s distinctive brand of will find themselves scoffing in disbelief at the cartoonish bloodbath that unfolds over two hours of stage time.

The story's set in 1993 during the very early stages of the peace process, on a stage that alternates between a humble home on the island of Inishmore and a sparse backdrop of the landscape. 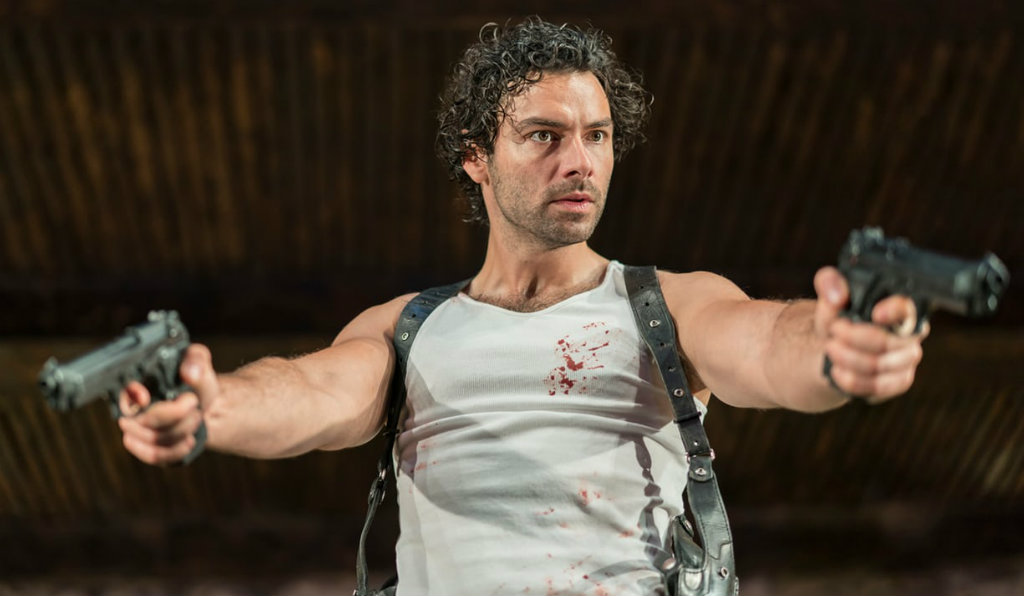 Turner is brilliantly blithe as Padraic, a man so unhinged the IRA don't want him and even the Irish National Liberation Army are wary of him. We first meet him mid-way through torturing a Belfast drug dealer, methodically explaining how it’s advisable to head to the hospital later for tetanus jab to stop the severed toes going septic.

Brutality is balanced with a matter-of-fact morality, which Turner negotiates with quicksilver comic timing and twisted glee. Thanks to this jaunty comedy and director Michael Grandage’s ebullient use of over-the-top blood spurts and gun shots, even the squeamish will laugh along.

When Padraic’s dad phones with news that beloved cat Wee Thomas is poorly, glib threats dissolve into hysterical tears. Close range shooting or slicing off bodyparts may not bother Padraic, but he’s a jumble of tender compassion when it comes to one black ball of fluff. 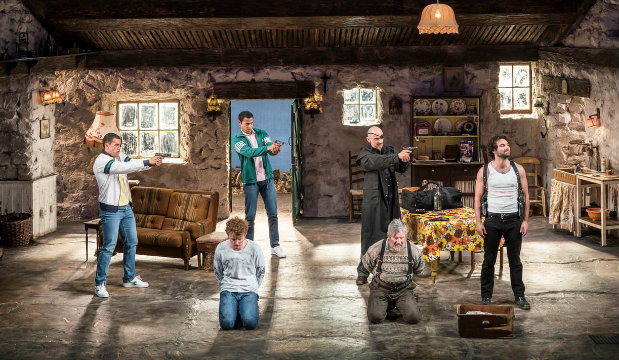 Padraic rushes home to the island of Inishmore, only to discover that his cat has been the victim of a sadistic attack. Sixteen-year-old Mairead (Charlie Murphy) is there to meet him, armed with a pistol, fiendishly good aim and a shared love of cats.

And so begins an enraged mission to seek revenge for the sake of poor, mutilated, Wee Thomas.

As ever with Martin McDonagh’s writing the gratuitous gore builds into a striking truth. We guffaw and recoil at the ease with which violence becomes normalised, spreading like a fire and snowballing in severity. Then we groan with the bleakly funny realisation that all that bloodshed was, of course, totally misdirected and fully futile.

It's a familiar message, but it's delivered with disorientating wit and plenty of (literal) guts in this ribald revival. Book right away or prepare to queue for day tickets. And do not fear: no cats are harmed.

The Lieutenant Of Inishmore follows on from a revival of John Logan's Red as part of a two-play season for Michael Grandage's theatre company.

The Lieutenant of Inishmore 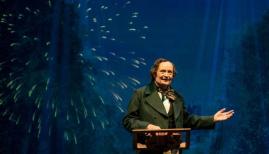