Jim Broadbent stars in a new dangerous, twisted and funny play by Martin McDonagh, premiering at the Bridge Theatre this autumn 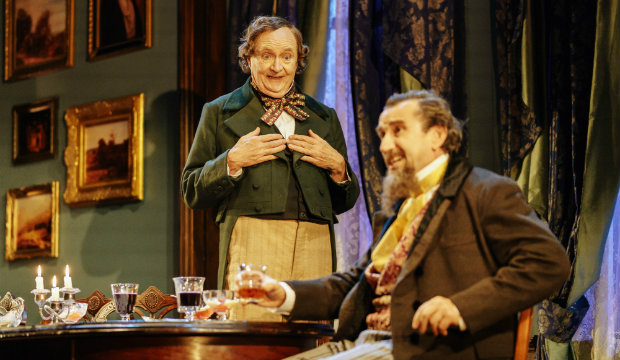 With Jim Broadbent as Hans Christian Anderson and Tom Waits as the Narrator, the production value is high. Broadbent’s Andersen is narcissistic, moronic, racist and misogynistic, but most horrendously, he keeps a Congolese pygmy woman called Marjorie (really Mbuta) in a box in his attic. Played by Johnetta Eula’Mae Ackles, Marjorie is the actual writer of Andersen’s stories. She yearns to return to the Congo to stop the genocide that is about to be committed by Belgium under Leopold II.

With an extended cameo of Charles Dickens, played by Phil Daniels, who has similarly exploited and kidnapped a Congolese woman (Marjorie’s sister), McDonagh makes clear the metaphor that the mythic genius of Europe was a result of destructive, harmful and deplorable colonialism abroad. The intentionally abrasive jokes keep coming, with both Dickens and Andersen being cast as really awful people. But strangely, McDonagh does not explore Marjorie’s reasons for writing these fairytales nor where they come from.

The pace becomes stymied by some odd time travel narrative that’s never fully explained. Tom Waits’s narration is unsurprisingly magnetic, and Broadbent and Ackles have a good dynamic, but there isn’t much development of character in the text for the actors to harness.

Although McDonagh is inarguably clever and continues to cast gruesome violence as the everyday, it’s unclear here what story is being told here, or why. While Designer Anna Fleischle creates a stunning an intricate world, McDonagh’s script fails to follow suit, and A Very Very Very Dark Matter ends up being an occasionally funny if not stagnant satire.

by By Brendan Macdonald