5 CW readers are interested
La Traviata review , King's Head Theatre 4 La Traviata review , King's Head Theatre Claudia Pritchard
Exhausting business, singing. (Brace yourself for the carol service season, for you will be wiped out by all those verses.) So hats off – at the gentlemen's club which is the setting for a modern-day Verdi opera – for the soprano who not only has to soar to the heights and plumb soulful depths with her voice, but also hoist herself up and down the pole that helps bring the punters in. In impossibly high heels, too, of course.

La Traviata is usually a 19th-century festival of satin and flounces, but a new, slimline production for the King's Head Theatre, Islington takes a fresh look at the story of a woman who renounces her love to save a family scandal. And while tweaks to the plot mean that an important element is lost – the sisterly act of breaking off the relationship so that another woman's prospects are not jeopardised – in its place comes the highly plausible self-advancement of a politician at the expense of a low-paid worker.

When Violetta performs her desultory pole-dancing act before a prospective MP, Richard Sinclair, and his naive composer son, Elijah, the young man is smitten, and the couple move in together, Violetta swopping her fishnets for leisurewear. But money is tight, the rent is due (her employer and landlady rolled into one character, hard-nosed hostess Flora), and Sinclair wants to buy her off, because she taints the reputation of a politician who must be 'purer than pure, untouchable..'.

A chilling and furious showdown between all four characters sends Violetta out on to the streets. And that scene, with its soaring singing, passionate characterisation and real tension typifies the electrifying drama of this wonderfully reworked piece, gasps and groans from the audience revealing real shock at Violetta's plight. This Violetta is not mortally ill, as in the original, but her life is imperilled in other ways.

There is humour too, which heightens the loss when the relationship goes needlessly wrong: as Karaoke is called for, Elijah plucks one of his own musical scores from his satchel and runs through his composition with the onstage pianist, showing him how it goes – a lovely touch. 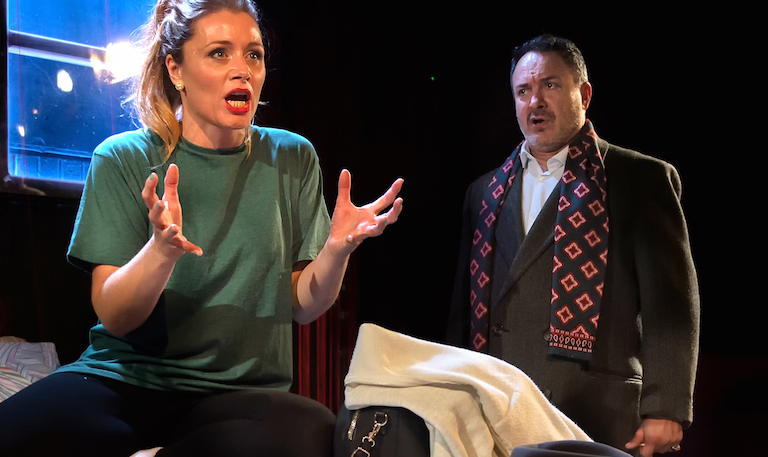 Director Helena Jackson, a graduate of the King’s Head Theatre’s own directors' scheme, has co-written this new English version with Becca Marriott (singing Violetta on some nights). They have a real feel for the rhythms of the original Italian libretto in their quickfire English adaptation.

While there was less secure singing at times from Gráinne Gillis as Flora, and Alex Haigh as Elijah, the ensemble numbers were rock solid and Victor Sgarbi's MP Sinclair is a reliable slimeball. When Becca Marriott sings Violetta, Gemma Morsley sings Flora, Oliver Brignall is Elijah and Michael Georgiou plays Sinclair.

This is a fantastically direct and perceptive introduction to Verdi for anyone who fears that opera will be overstuffed, and a refreshing new look for Traviata's existing fans.

'La Traviata' is sung in English.Dinner and opera packages are from £40.

Half Six Fix, London Symphony Orchestra and guest soloists, Barbican
Sign up to CW’s newsletter
By entering my email I agree to the CultureWhisper Privacy Policy (we won`t share data & you can unsubscribe anytime).