Hilarious, fast-paced Gilbert and Sullivan from Charles Court Opera brings The Mikado into the 20th century

No kimonos, pigtails and ornate screens here, but suits and waistcoats, shirt-waisters and a buttoned sofa. At the British Consulate in Titipu, the what-ho clubbable chaps are busy with their power games and the 'three little maids from school' are straight out of St Trinian's, with a taste for strong drink.

Gilbert and Sullivan wrote The Mikado during a national fixation with all things Japanese, but in his infinitely inventive production, director John Savournin enjoys to the full the work's universal strands: the idiocy of pompous self-regard, the resourcefulness of lovers and the madness of legislation and procedure. Cue many, many swipes at Brexit, in two songs that are traditionally updated, with digs at fish-slinging and blue passports, among other absurdities. (At the heart of the plot is a man hell-bent on cutting off his own head to survive. Remind you of anybody...?)

Terrific scenes include the increasingly panicky story invention – think Polly and Basil improvising the truth in Fawlty Towers – and hi-jinks at the consulate with shades of Bertie Wooster and the Drones Club.

A cast of eight cover all the bases with fast-moving, nifty staging and principals putting in the chorus parts, which aids the production's breakneck momentum. Philip Lee is an ill-shaven and ambitious Ko-Ko, who hopes to marry his ward, Yum-Yum. But Alys Roberts's sweet-voiced Yum-Yum is already in love with a poor musician, Jack Roberts's apple-cheeked Nanki-Poo, the son of the Mikado in disguise.

Nanki-Poo is hiding from the overbearing Katisha – and here Savournin neatly navigates one of G&S's trickier tropes, the ridiculing of the older woman. With baritone Matthew Siveter in drag as Katisha, we are less inclined to flinch. Jessica Temple and Corinne Cowling are Yum-Yum's playful friends. There is wonderful work too from Matthew Palmer, first as a jolly good fellow at the consulate, then flushed and whiskery as the Mikado (here an army general who has been at the port), and from Matthew Kellett as Pooh-Bah, the snob with all the jobs. 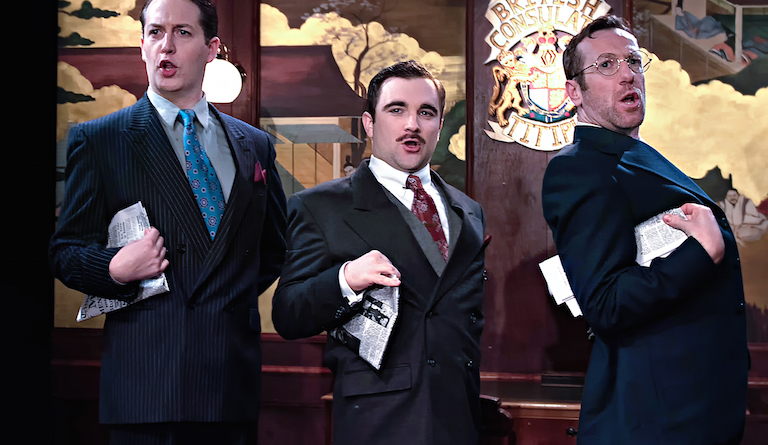 They are gentlemen in Japan: Matthew Palmer, Matthew Kellett and Philip Lee in Charles Court Opera's The Mikado

The theatre skills of this tight-knit cast would be a treat in any context, let alone with an entire opera score to sing, and that singing is spot-on: this is a cast that sings with its ears, every ensemble number impeccably tight. Musical director David Eaton drives this well-oiled machine from the piano, and the engaging set and costumes are by Rachel Szmukler.

When the librettist WS Gilbert and composer Arthur Sullivan first staged their new operetta at the Savoy Theatre in 1885 it ran for a record-breaking 672 performances. In the same year it notched up another 250 in New York, which had also caught the G&S bug. But this King's Head production runs only until 21 April.

As ingenious as origami, as joyful as cherry blossom, Charles Court Opera's The Mikado is a treat at every level. You would be very lucky indeed to see an opera as fast, funny and skilful as this before the year is out. Best book your ticket for Japan now.