The triumphant return of a Handel opera to Covent Garden, after 280 years, is a tremendous curtain-raiser for the London Handel Festival

With the stage stripped back to only its own single, curved bench, just seven characters play out the complex deals between imperial Rome and Egypt, where Queen Berenice is unwilling to be offered in marriage to seal a peace pact.

The plot of the opera Berenice, by the composer who adopted London as his home, resembles an ornate Georgian cabinet – all secret drawers and false panels. And as in the Commons, the allegiances and motives are sometimes hard to keep up with. But in a production of unfailing wit and vivacity by Adele Thomas and an all-woman team, Berenice spins through the air from ancient history, through Handel's time, and right into the lap of the present day.

The women in paniered court dresses, the men in the wigs and breeches of Handel's own wardrobe, with rouge and lipstick for both, are superficially all manners. But below these embroidered and powdered facades seeth passions and rivalries. Berenice is in love with Demetrio, who is in love with her sister, who pretends to love Arsace, who .... oh never mind. The point is, aria after aria unwinds in a series of elaborate knots, each solo supported by the interaction between other characters, like a gorgeously decorative fabric in music. 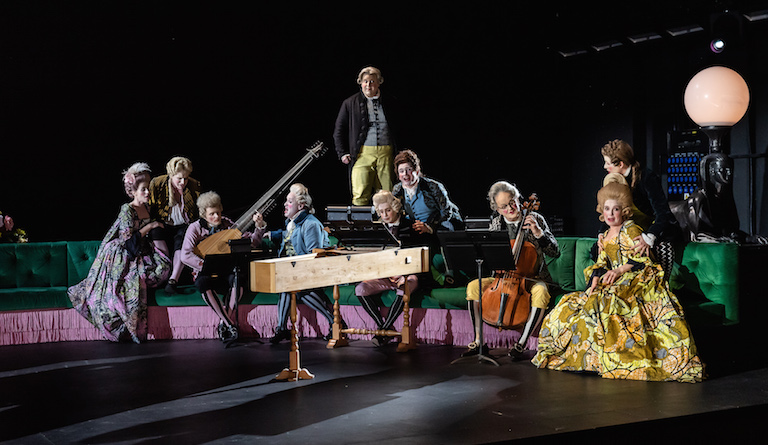 The cast and on-stage continuo band of Berenice, with Claire Booth (far right) in the title role. Photo: Clive Barda

As Berenice, Claire Booth, making her Covent Garden debut, is magnificent. Scooting around highly decorated music with ease – her impressive track record in often demanding contemporary music pays dividends here – she is by turns imperious, seductive, passionate and incandescent with rage. Her voice is so agile it slides seamlessly from song to almost spoken word, as fury strips out the notes like acid, and leaves the bare bones of emotion.

One of the joys of this production is that alongside this rightly famous name are two newer voices and personalities, strong in both departments. Both products of the Royal Opera's brilliant talent-spotting and development scheme, the Jette Parker Young Artists Programme, soprano Jacqueline Stucker and counter-tenor Patrick Terry, both from the US, are ones to watch – and hear.

In the trouser role of Alessandro (in Handel's day this would have been a castrato), Stucker sings radiantly, and struts and declaims with convincing masculine self-belief, while Terry as Arsace is all self-deprecation as he wrestles with desire. His clowning and acrobatics are a hoot. What a great all-rounder. 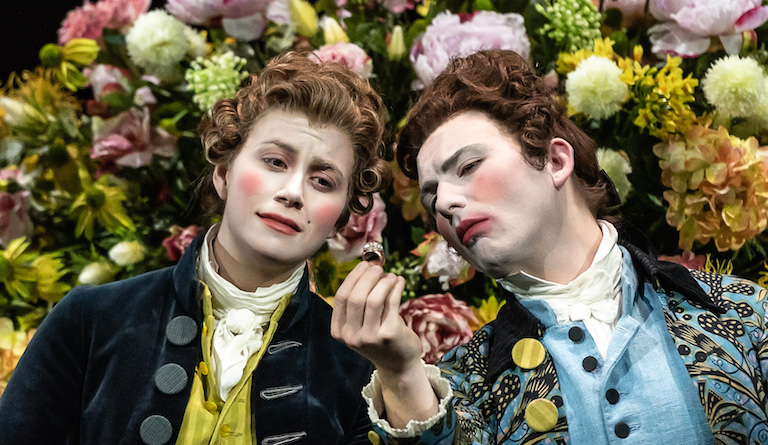 Ones to watch: Jacquline Stucker as Alessandro and Patrick Terry as Arsace. Photo: Clive Barda

Berenice opens the month-long 2019 London Handel Festival, which explores the theme of Handel’s Divas, tracing the lives of the female singers who performed and inspired the composer’s music. Laurence Cummings, also making his Royal Opera debut, conducts the London Handel Orchestra with all the verve and sizzle we have come to relish in his readings of early music, and there is nothing but joy from designer Hannah Clark, the lighting of DM Wood, Emma Woods's movement and Slema Dimitrijevic's smart translation into English. With no surtitles, the impeccable diction is everything.

Roll on another four weeks of Handel, all over London, whatever is happening in SW1A. It's a timely moment to remind ourselves that Handel was given British citizenship by act of Parliament so that he could be George I's court composer, and teach the royal family.

As for Berenice, she is finally won over by the man chosen for her. What, a happy ending? Well, up to a point. Just as we were applauding in the house, and in the House Theresa May was preparing herself for sacrifice, above the stage up went these written words: '19 days after they married, Alessandro had Berenice killed'. Clearly there is no such thing as a good deal.