Lover, nobleman, scoundrel, liar, cheat... They all roll into one in the character of Don Giovanni, but morality will win the day in a new production by Michael Boyd

1 CW reader is interested
Don Giovanni, Garsington Opera review 4 Don Giovanni, Garsington Opera review Claudia Pritchard
Splat! There goes a whole can of grey paint. All over the white canvas. Splat! There goes a red one. Swish, swash, slash... It's a work of art. And who is the bold creator and then invader of this giant vulva? Why, that rascal Don Giovanni, libertine, cheat and now, playboy artist, despoiling the ancestral art collection with his interventions.

TRY CULTURE WHISPER
Receive free tickets & insider tips to unlock the best of London — direct to your inbox
This aristo-abstract expressionist is the brainchild of director Michael Boyd, realised by designer Tom Piper on a set that catches your breath with its ingenuity and pizzazz at Garsington Opera, in a new production in which a young cast have all the fizz and vigour of Mozart's energetic music. To take exception to this modern-day reading would be to miss the point: Giovanni is an outrage, not just a naughty boy. Of course he will let his hangers-on doodle on the landscapes, school of Claude Lorrain.

Douglas Boyd (no relation to the director), conducting Garsington Orchestra and the Chorus of Garsington Opera, captures the don's reckless progress with swift tempi and vivid solo work, those instrumental comments adding to the murmuring throng around the dissolute count. 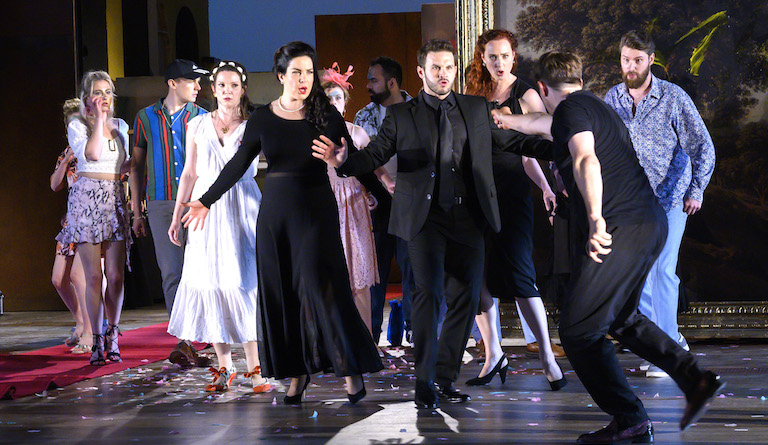 Donna Anna has been assaulted by Giovanni, Donna Elvira jilted. Man servant Leporello is taken advantage of and regularly duffed up. Servant Zerlina nearly loses her fiancé over him. Oh, and he has killed Anna's dad. A day moves fast in this corner of Spain (or wherever. Or everywhere.)

As the don's actions become more and more extreme, the music madder and madder, so too do the don's artworks. Even his last dinner, a KFC takeaway, is squirted in blood-red ketchup until there is more sauce than supper.

The youthful drive of the cast is the genuine article, and if that means some vocal insecurities, notably in Camila Titinger's Donna Anna and Paul Whelan's Commendatore, the dividend is a zest that can't be faked. Sky Ingram's furious Donna Elvira simmers to a raging boil, David Ireland's Leporello is genuinely funny and firm-voiced, and as the Don himself, Jonathan McGovern is urbane and infuriating. 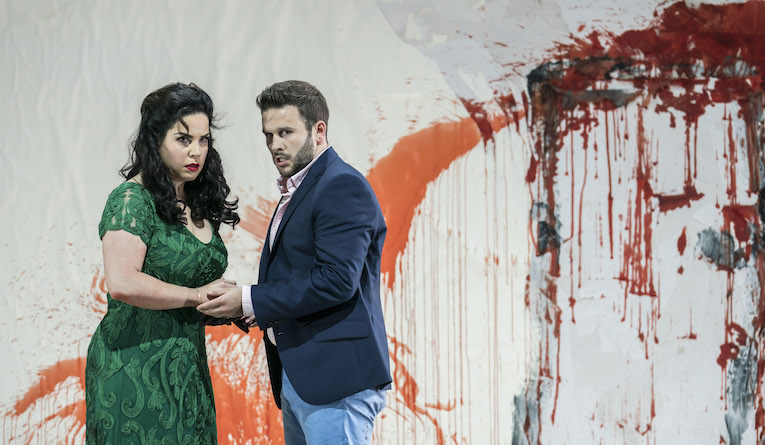 Around these principals cavort a bunch of fun-loving hangers-on, kicking up their baby-smooth heels in crazed dances. Choreography and movement by Liz Ranken gives this production a special energy, and fight director Terry King lays on some spectacular punch-ups.

Trystan Llŷr Griffiths sings a tender Don Ottavio with character, and Thomas Faulkner's Masetto makes you want to hear much more from this fine bass voice.

This is the most exciting and well thought-through Don Giovanni I have seen for years. Like Kasper Holten's Royal Opera House Don Giovanni (returning on 16 September), the show ends with the don's demise, and without the resolution of the other characters. You just have to sing it in your head on the way to the train home. But you will have had a wonderful adventure, nonetheless.