It swings like a musical but also goes deep into the soul: Bernstein's faith-inspired work is both joyful and profound, and the National Youth Orchestra will perform it with passion

1 CW reader is interested
Bernstein's Mass, Royal Festival Hall Bernstein's Mass, Royal Festival Hall Claudia Pritchard
The richly-talented National Youth Orchestra of Great Britain will be at the forefront of a weekend celebrating the spirit of idealism and protest of the mid-20th century, embodied by the great American composer, conductor and educator Leonard Bernstein.

A cast of 400 amateur performers drawn from across London, including singers and choirs, dancers, a congregation of street singers, a rock band and a brass band will join the NYO and Chineke! Juniors for two performances of Bernstein’s radical work Mass, conducted by his former pupil Marin Alsop, at the Royal Festival Hall.

The piece was premiered nine years after the assassination of President John F Kennedy and captures America at a moment of crisis. This new staging marks his centenary year and is the centrepiece of a weekend full of music-making, talks and opportunities for young people to get involved. It also includes a special edition of Southbank Centre’s year-long series 'What You Need to Know', that will explore Mass in detail with speakers including Alsop and Kate Molleson.

On Sunday 8 April, in Unleashed, the NYO returns to pay homage to Bernstein and his legacy as an educator with a 21st-century take on his famous Young People’s Concerts for all the family. Unleashed, a concert by teenagers for teenagers, is conducted by Kwamé Ryan. Repertoire includes music from The Hunger Games.

Audiences will be welcomed into the Royal Festival Hall foyer by NYO musicians before being ushered into the auditorium. Wrap-around events include a 'Come and Play' session and instead of a traditional programme audiences will receive specially designed postcards by NYO Illustrator in Residence and former Children’s Laureate Chris Riddell. 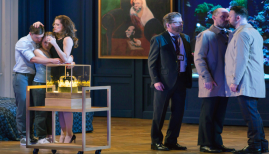 Lessons in Love and Violence Review