1 CW reader is interested
Rachmaninov Symphony No 3, Royal Festival Hall Rachmaninov Symphony No 3, Royal Festival Hall Claudia Pritchard
Concertos for two pianos are rare and exotic creatures; those over-achievers Mozart and Mendelssohn wrote two each; Poulenc, Stravinsky and Vaughan Williams one apiece, but few other examples exist in the repertoire, so the chance to hear the world premiere of an entirely new one is a significant event.

The London Philharmonic Orchestra has commissioned Bryce Dessner, Golden Globe-nominated composer of the score for The Revenant, to compose one for the Labèque sisters, two performers guaranteed to bring panache and dazzle to anything they play.

The new concerto fits snugly into a concert fittingly entitled Brilliance and Longing – Katia and Mariella Labèque providing the brilliance and Rachmaninov the longing in his songfully melancholic Third Symphony from 1936.

The evening will open with a continuation of this LPO season’s exploration of the works of Stravinsky, this time Jeu des Cartes, written at the same time that Rachmaninov was working on his symphony. Stravinsky’s neo-classical style ballet score features playing-card characters who mirror behaviour in any society’s class system, where haughty Queens and Jacks can be brought down by the lower orders. Conductor John Storgårds deals. 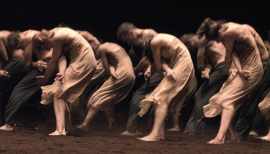