Inspirational works by JS Bach are cut with contemporary compositions influenced by them. Featuring Roderick Williams

Mathematician James Sparks and the baritone Roderick Williams present Bach Remixed, part of a dynamic series entitled Bach and the Cosmos, with City of London Sinfonia and their creative director and leader, Alexandra Wood.

Sparks says the connections between music and maths have always fascinated him. 'The elements of music – harmony, rhythm and so on – are inherently mathematical, but the connection is much deeper than that: symmetry, structure and beauty all play a fundamental role.

'Bach’s approach to composition takes this idea further. Like a mathematician, he systematically works through different combinations and permutations of musical ideas, using symmetry to build complex musical works from only a small fragment of a theme.'

Sparks will explore the composer's use of maths and numbers – the language of the cosmos – with a visual explanation of the relationships contained within. The programme includes two cantatas sung by Roderick Williams, Komm, süßer Tod and Ich habe genug, the motet Singet Dem Herrn, sung by the Epiphoni Consort, and the Brandenburg Concerto No.3.

Sounds like the perfect evening for mathematicians and music-lovers alike – not always the same thing...

Bach and the Cosmos: Bach Remixed 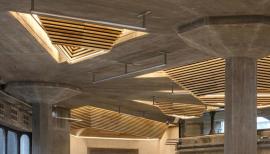 The Southbank Concert Halls are back!