Kong: Skull Island film review 3 Kong: Skull Island film review Matthew Robinson
Looking back, it’s apparent that King Kong (2005) embodies the turning point of Peter Jackson’s career. Its flaws are the ones that ruined his subsequent films, The Lovely Bones (2009) and the Hobbit trilogy (2012-14): sentimentality, over-reliance on CGI and a running length that disregarded the audience’s patience and bladder capacity.

But its strengths were the strengths of The Lord of the Rings (2001-3): a healthy balance of reverence and humour, likeable heroes with discernible arcs, and the patience to let the sense of scale and awe build naturally. These qualities are especially apparent while watching Kong: Skull Island, because the new film has none of them.

That’s not to say Skull Island is irredeemable – it’s just that director Jordan Vogt-Roberts has rebooted a fantastically over-the-top movie as something even more ridiculous and adolescent. It is to King Kong what The Shallows was to Jaws, and it shares with The Shallows a pleasing, canny approach to dumb creature-feature action.

The plot was written on the rim of a shot glass. It’s 1973, and blustering crackpot John Goodman heads an expedition to the titular island, accompanied by Brie Larson’s photojournalist, Tom Hiddleston’s SAS tracker, and a platoon of soldiers under the command of Samuel L. Jackson’s menacing Colonel. Things go predictably pear-shaped early on, and the scattered team is left to try an escape an island on which a mile-high killer ape is the least of their problems.

Peter Jackson took his time getting to the main location, cranking up the mystery for as long as possible. Vogt-Roberts whisks us off to Skull Island with the breeziness of a cheap travel agent, and spends the rest of his film darting from one scene to another with such hyperactivity that sometimes the film resembles an extended trailer of itself. And whereas Jackson’s Kong (as 'performed’ by Andy Serkis) demonstrated actual emotions in his tender relationship with Naomi Watts, the Kong of Skull Island is a thuggish furry skyscraper that has the most perfunctory of flirtations with Brie Larson. 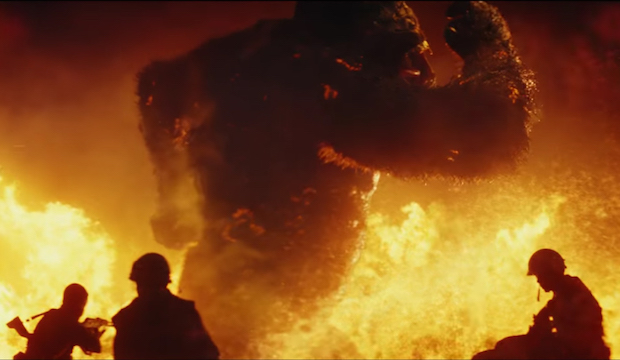 Larson’s war photographer doesn’t quite have the depth to be called two-dimensional: she’s an invisible singularity of a character, impossible to remember even while on-screen. It’s almost a relief that she’s not made to have any kind romance with Tom Hiddleston’s tracker. It would be creepy, like watching lizards mate.

Hiddleston himself doesn’t act in Skull Island – he politely condescends to appear in it, as amused as anyone that he’s been cast as a rugged ex-military type. He looks like he could track down, at most, a nice blazer in Hackett.

Character and plot are all entirely by-the-by, of course, an excuse for the good stuff: the battles, skirmishes, devourings and environment-wrecking smash-ups. Maybe you have to see a film that gets this stuff painfully wrong to really appreciate the ways Skull Island gets it right. Vogt-Roberts is known for his comedy, and the set-pieces have a kind of absurd visual wit, a sense of cruel irony in the stickiest ends. It’s a shame your 3D glasses won’t hide your guilty smirk.

Many people will find this film as tedious as other mega-budget, franchise-bound, special-effects blockbusters, but for connoisseurs of such films – you know who you are – this beast provides a feast. 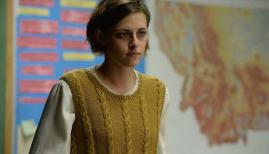