The Midwife film review 3 The Midwife film review Matthew Robinson
In Martin Provost's careful drama, Claire (Catherine Frot) is a middle-aged midwife living an ascetic existence in the suburbs of Paris. She doesn't drink or smoke, she hasn't had romantic relationship for years (her son, who she raised alone, is in medical school), and she seems to subsist entirely off vegetables she grows in her garden.

The cornerstone of her existence is her midwifery. Delivering babies is a calling that she does with assurance and satisfaction, but it's a calling that's about to be imperiled: her independent clinic is shutting down, unable to compete with larger and more technology-advanced 'baby factories'. This is reason enough for a midlife crisis; and then Béatrice (Catherine Deneuve) turns up.

Béatrice was the mistress of Claire's father 30 years previously, back when he was a dashing competitive swimmer and - not coincidentally - right before he shot himself in the heart. Claire isn't over the moon about Béatrice making contact with her, understandably, and has little to say apart from bloodlessly (and slightly cruelly) relaying the old news of her father's death

But Béatrice insists on sticking around. Childless, she makes a living from participating in shady gambling events, and now she needs someone more than ever: she has recently been diagnosed with brain cancer

Blowsy, full-blooded, unapologetic, prone to scorn and tears, Béatrice injects Claire's life (and the movie) with vitality, and even though she's clearly a selfish and childlike woman Provost's film clearly admires her. Her appreciation of the things that are killing her - cigarettes, red meat - are the things that keep her alive in a truer sense, or so The Midwife would have us believe.

The idea that proximity to such a person redeems or improves Clare never feels as convincing as it needs to, and Béatrice's own fate feels dubiously neat, but both characters are beautifully played by Frot and Deneuve. They are welcome company to the audience, if not to each other. 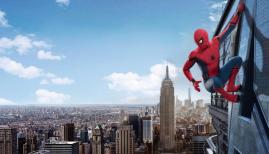 5 legitimate questions you have about the new Spider-Man film