Whitney: Can I Be Me is a hard-hitting look at the life of a troubled star and her voice of extraordinary power – yet it lacks bite

Whitney: Can I Be Me, film review 3 Whitney: Can I Be Me, film review Helena Kealey
There are easy comparisons between the lives of Whitney Houston and Amy Winehouse. Both rose to international fame on the back of extraordinary vocal talents. Both fell in love with 'bad boys'. Both had demanding families dependent upon their income. Both found themselves hounded by the press. Both leaned on drugs and drink for release. Both died, on their own, as a result of substance abuse, and within a year of one another.

Now, both of these extraordinary women have something else in common: documentaries that examine their lives, from their rise to stratospheric heights of acclaim, success and fame, right to their unhappy ends.

There will be many articles comparing documentarians Nick Broomfield and Rudi Dolezal's examination of the life of Whitney Houston and Asif Kapadia's Amy. On the surface, both seem similar. Both feature never-before-seen footage from the young stars' lives, live performances and TV appearances over a backdrop of interviews with close family and friends.

There can be no denying that Whitney lacks the bite of Amy. Having lived most of her life before the ubiquity of phone cameras and the rolling news cycle, and being, perhaps less likely to invite journalists into the home, Whitney's substance abuse went relatively undocumented.

No videos exist, or ever existed, of Whitney gurning to camera, staggering around the stage or walking around with blood pouring out between her toes. Her death came as a relative surprise to the public.

Whitney: Can I Be Me doesn't quite manage to answer the question of how this wholesome, God-loving gospel singer ended up dead in a hotel bathtub in 2012 with a cocktail of drugs inside her system. The hows, whats and whens of Whitney's relationship to drugs remain shrouded in mystery.

But the 'why' is answered. Where Asif Kapadia's documentary decided that Amy's father was the villain of the piece, in Whitney, everyone is to blame.

There was the pressures of her home life: a demanding family who used her like a show-pony to bring in their own cash, there was her unruly husband Bobbi Brown who undermined her attempts to get clean, there was the (allegedly) lesbian relationship with her friend and assistant Robyn Crawford that turned her mother against her and introduced tensions into her marriage. When Whitney's father sued her for money, she was finally abandoned.

Most interesting of all are the revelations of how Whitney, the first major African-American super-star in America, was encouraged to produce music that would appeal to a white audience, alienating her from the black community. After Whitney was booed at the Soul Train Music Awards she started asking 'Can I be me?' – which is where the documentary takes its name from.

No one can complain that Whitney is voyeuristic and intrusive in the same way that Amy clearly is. Whitney is much more respectful of the private life of the star, then. But much less good as a result. 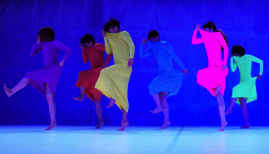