The stars of Stan & Ollie, Steve Coogan and John C. Reilly, are absorbing in the new Laurel and Hardy biopic following the comedy duo's 1953 tour

Stan & Ollie film review 4 Stan & Ollie film review Euan Franklin
The new biopic about the monumentally popular double act Stan Laurel and Oliver Hardy starts with a long, uninterrupted tracking shot of the comedy duo walking through the sound stages at Hal Roach Productions – showing the hustle and bustle of showbusiness. The film then shoots forward 16 years, and we see them in a completely different light: they've aged, they're known only by a certain generation, and they have a fraction of the fame they once enjoyed.

The focus of Stan & Ollie is on the pair’s UK and Ireland tour in 1953, which is meant to pay for the development for their new movie – a spoof of Robin Hood called Rob ‘Em Good. The duo spend most hours with one another, and buried grudges begin to re-emerge.

Steve Coogan and John C. Reilly are utterly convincing, down to the slightest quiver. Reilly is engorged in heavy prosthetic make-up to mimic Hardy’s flabby weight, and gives plenty of character and emotion to penetrate the layers. Coogan, too, executes Laurel’s expressions with beautiful accuracy – his signature lip manipulations bringing empathy as much as hilarity. 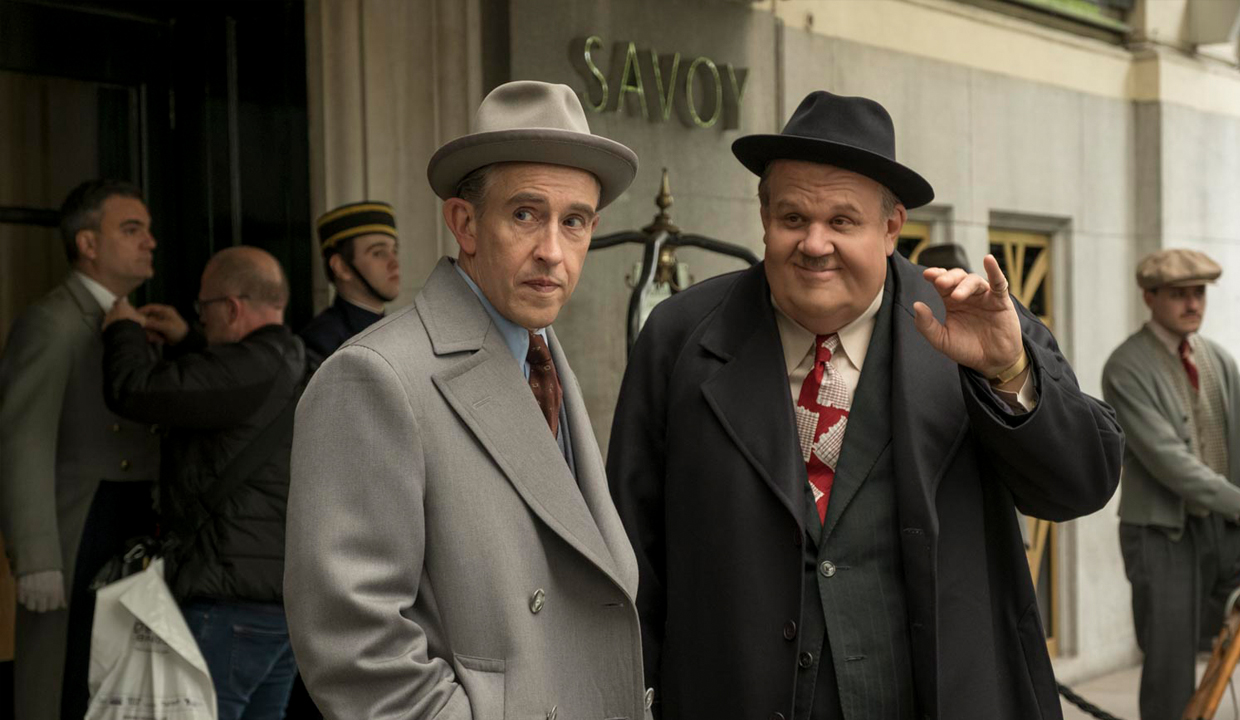 A match made in heaven: Laurel and Hardy are brought to life by Coogan and Reilly

Director Jon S. Baird (Filth) and screenwriter Jeff Pope (Philomena) clearly adore the comedians' performative personalities, even and especially when they’re not on stage. Following them around on this initially underwhelming tour, starting in a soaked Newcastle, their love of performing pulses through the story – to the point where life imitates their comedy art. There’s even one scene when Laurel and Hardy carry a suitcase up a flight of stairs, only for it to tumble all the way to the bottom again. These moments are a bit on the nose, and probably not as funny as Pope and Baird want them to be, but they’re good enough to earn a few nostalgic chuckles.

This builds up the emotional heart of the film, which is where Stan & Ollie really shines. The duo are designed to provide comedy, but have few fans to provide for. They feel almost useless in the tense 1950s climate. Comedy evolves with the likes of Norman Wisdom and Abbot & Costello, Laurel’s plans for Rob ‘Em Good start to fall through, and the hilariously disingenuous tour manager Delfont (Rufus Jones) books Laurel and Hardy for smaller venues and showers them with transparent praise. But the feelings of doom and gloom are balanced by their comedy, as well as their loving but conflicting partners (Shirley Henderson and Nina Arianda respectively) who, as Delfont says, are like a double act in themselves.

Stan & Ollie is a funny, fascinating, and somewhat tragic exploration into Laurel and Hardy’s final years as performers. Pope doesn’t explore their deeper backgrounds, which could have given the script an extra layer, but the characters are completely absorbing regardless. The connection between them is strong, and it’s hard to watch it break. Even though comedy has to move on from Laurel and Hardy, it’s upsetting to leave them behind.