Don’t Worry follows his road to recovery, with the focus not so much on his accident, but his alcoholism. We start at the end, where John (Joaquin Phoenix) is delivering a talk to a packed theatre about his experiences with drinking and disability. The narrative whizzes back and forth to him recounting the same stories in different places (mostly at AA meetings), prepping for an absorbing jumble of scattered events.

Phoenix is staggering as John, unsurprisingly – his characterisation lies somewhere between Larry Sportello in Inherent Vice and Freddie Quell in The Master; almost a hippy, slightly deranged. Like many of the psychologically affected characters he’s played in the past, Phoenix walks a delicate line between trauma and comedy, realistically balancing his emotions with John's humour. It's almost an antidote to the reality of John's situation, facilitated through his hilarious (albeit not always politically correct) cartoons. 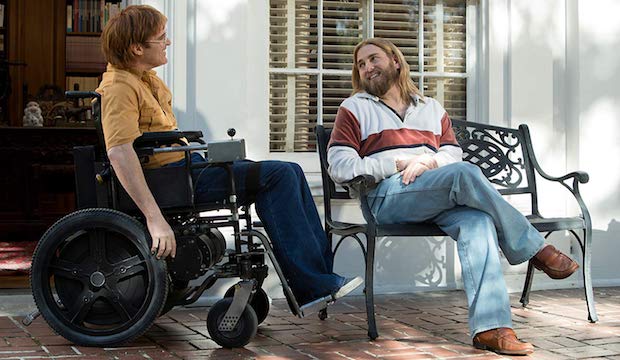 Joaquin Phoenix and Jonah Hill give excellent performances in Don't Worry, He Won't Get Far on Foot

Jack Black pops up as Dexter – introducing himself in a classic Black fashion (‘Far fucking out!’) – John’s drunken acquaintance who was the person responsible for the critical crash. Black holds an emotional weight, absent since Noah Baumbach’s Margot at the Wedding. It's easy to forget that Black is a genuinely good actor and, despite his limited screen time, Don’t Worry proves his talents once more. Some of the best laughs and bombshells come from a Jesus-like Jonah Hill, playing John’s sponsor Donnie, who warmly refers to others in his AA group as his ‘piglets’.

There’s a whiff of realism to Van Sant’s style, as cinematographer Christopher Blauvelt’s camera drifts back and forth with the story and its players. The opening feels like a documentary, almost verité in its approach. Further along in the film, that style is sometimes lost in an accelerated haze of different memories – but proves vital for the film’s more emotional scenes. There are often tears and laughs in the same line, making the dialogue spill with natural humanity.

Don’t Worry is a touching insight into a tragic and traumatic yet funny situation – not dissimilar to the spirit of John’s drawings. Van Sant is often inventive and even experimental – especially in his montage sequences, edited like rolling tapestries across the screen. Although the script is occasionally too fast, his emotional journey ultimately succeeds.

Don't Worry He Won't Get Far on Foot