On Netflix this weekend, Alfonso Cuarón returns home with his new film Roma, a stunning and emotional story of his hometown

Roma film review 4 Roma film review Ella Kemp
The name of Oscar-winning director Alfonso Cuarón’s new film comes from the neighbourhood of Mexico City in which it is set: Roma is a picturesque, undeveloped region that pulses with hopeful energy and life. The monochrome picture provides an immediate juxtaposition, giving the film an aura of bleak reality somewhat reminiscent of Pawel Pawlikowski’s Ida. The early 1970s setting sees protagonist Cleo (newcomer Yalitza Aparicio) working as a maid and nanny to a wealthy family, faced with a barrage of misfortunes that life throws at her.

The film’s naturalistic brilliance must be credited to Cuarón’s semi-autobiographical script. While Cleo struggles with personally emotional challenges, pregnancy and the misbehaving children she takes care of, her life is further complicated by the natural disasters of her community – earthquakes, forest fires, and student riots. There is such believability in these occurrences, a feeling that this is truth, for someone if not just Cuarón himself. The authenticity breathes through the cast’s performances, the most impressive being Aparicio who captures every facet of Cleo’s personality with reserved charm and striking pathos.

The director lenses the film himself, indulging in long takes that let the camera sweep fluidly around a room or along a street. It is a style familiar from Cuarón’s previous work, and the absence of usual collaborator Emmanuel Lubezki does surprisingly little harm to the film’s look. 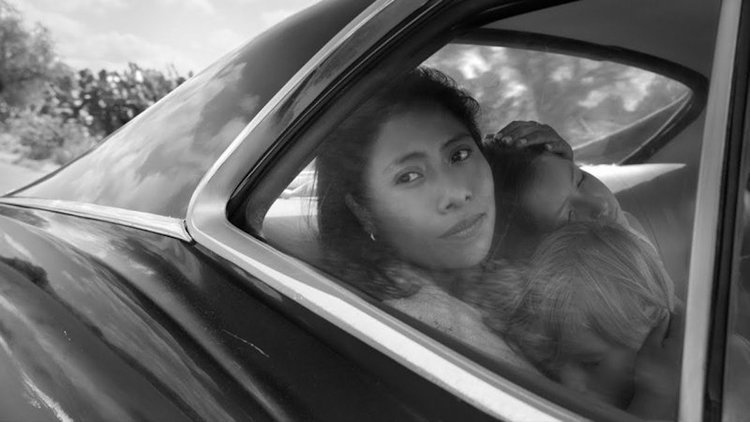 The slow pace and measured editing add levels of reality to the piece, as does the lack of music. Everything is intricately geared towards a certain response: it’s clear that Cuaron knows exactly which feelings he wants to bring to the foreground. Though some focus is given to the plight of Cleo’s employer, Mrs Sofia, it’s only done so to further highlight the effect on Cleo herself. As Cleo raises a leg from the ground to balance expertly with her eyes closed, empathy and emotional connection soar.

Whilst the film is in its expositional stage, introducing the characters and building the setting so lavishly, it is hard to fight a slight impatience. As conflict develops, it is obvious that something cataclysmic is just around the corner, but it is an hour or so into the film before this corner arrives. The film repeats this formula three or four times over, contextualising the lives of the characters only to upturn their worlds.

These events strike with such momentum and terrifying force that they elevate a slow-burning piece packed with poignancy to an undisputed masterpiece. It's only after the credits roll and the tension is finally released that appreciation can be given to all those measured moments, each seemingly more steeped in emotion than the last. Roma is in turn gripping, intense, honest and real, and a true joy to watch. But it is even better to reflect upon.

Reviewed at the 2018 London Film Festival. Roma will be released on Netflix on 14 December 2018.