In Bad Times at the El Royale, Drew Goddard crafts a pulpy world of sin and suspense, with a whole host of exciting names to boot

Bad Times at the El Royale film review 3 Bad Times at the El Royale film review Ella Kemp
Nevada or California? Red or black? Confess or forget? In the bi-state establishment that is the El Royale hotel, nothing is as it seems. In his follow-up to The Cabin in the Woods, director Drew Goddard creates a pulpy spider’s web in the hotel that promises a night to remember. Decisions tumble out of control with the fleshy precision of a gunshot to the back of the head, splattering blood across every inch of your screen.

An attractive ensemble deserves praise, offering a versatile and enigmatic group of characters. Each one has as much comic-book kitschiness as the next; with high-stakes drama imbued in their personalities. The eyewatering line-up sees Father Daniel Flynn (Jeff Bridges) meet Darlene Sweet (Cynthia Erivo), as they walk in to meet Laramie Seymour Sullivan (Jon Hamm) just before Emily Summerspring (Dakota Johnson) turns up. They are the guests waiting on the services of Miles Miller (Lewis Pullman), the sole concierge keeping the El Royale together.

By spreading attention across as many players, the network structure runs the risk of diluting the backbone of human intrigue - but in Bad Times at the El Royale, this format is powerfully mastered. Every actor brings decadent levels of commitment, which maintains a juicy level of entertainment in every new twist that crops up on cue. Five big dogs and two rogue hazards (including a Charles Manson-esque Chris Hemsworth) give some of the weirdest and most compelling performances of the year. 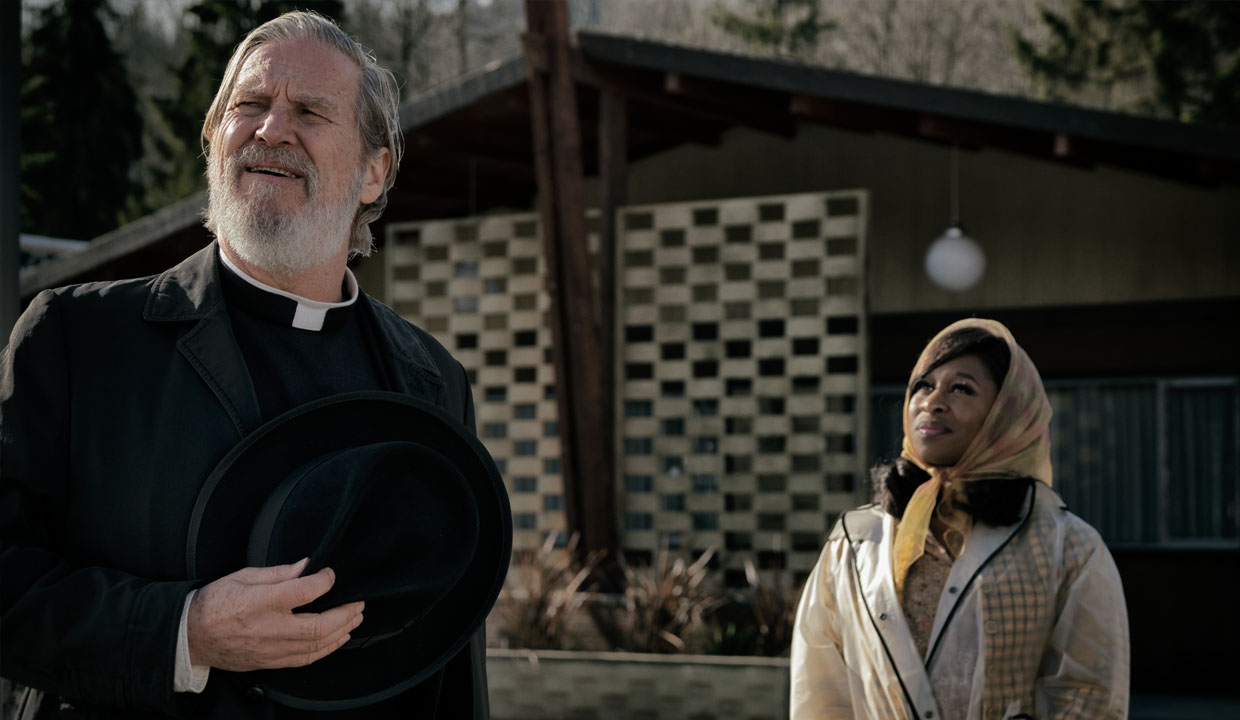 You won't find a dull moment at the El Royale. The suspense that the trailer promises is sustained, as secrets give way to sin and everyone is seeking absolution. Instead of meandering along with excessive exposition, Goddard’s script starts running and never stops: no one waits before getting into trouble, and nothing ever saves them. The usual catalysts do their job, by way of money, murder and kidnapping. But in the sheer ambition in cramming so much into one finite space, the film feels weighty and impressive from start to finish.

If the El Royale is a rest stop on the way to Hell, Satan’s home must be dazzling. It feels essential to mention production designer Martin Whist and cinematographer Seamus McGarvey, as the aesthetic of the film is ambitious, rich, and garishly magical. The camera moves from the menacing red lights into the whites of every person’s eyes, catching the danger of such an alien world without ever losing the humanity of those trying to get out of it.

There is no singular needle drop moment in Bad Times at the El Royale. Over the lengthy (somewhat excessive) runtime, damaged people keep doing bad things. That doesn't mean we get used to it or they become any less bad, but a relentless ride conditions its audience to expect the worst and exhausts the possibility for respite in the process.

The subversion of a well-trodden genre exercise is refreshing until it's suffocating. There is much to admire in Goddard's ambition and the astonishing craft of all involved, but the need to escape from the overwhelming tragedy often takes over. The Eagles warned us a long time ago though, in another drive-by not too far away: 'you can check out when you like, but you can never leave'.