Boasting a stellar performance from model-actress Diane Kruger, In the Fade tracks one woman's lonely fight for justice in a country not quite finished with its dark nationalist past

In the Fade 3 In the Fade Daniel Lewis
“Out of nowhere” is a more accurate translation of the original German title for this film, Aus dem Nichts. It’s a better one than the slightly quibbling In the Fade, if a less subtle one. The film’s plot, after all, is about a neo-Nazi bomb attack on a Turkish neighbourhood in which Katja (Diane Kruger) loses both her husband (Numan Acar), a Kurdish ex-drug dealer rehabilitated as a tax man, and her five-year old son.

The film’s starkly lit centrepiece is a Kafkaesque court case in which Katja’s lawyer (Denis Moschitto) fails to convince the judges of the attackers’ guilt — his case isn’t helped by the neo-Nazis’ particularly steely defence lawyer (Johannes Krisch) — which leads Katja to take the law into her own hands. 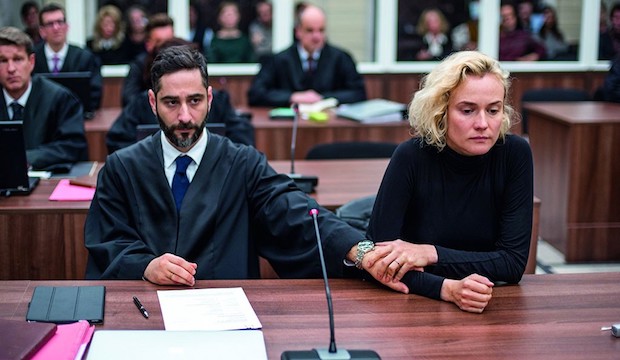 It that feels like a bit of a spoiler (and generally bad review etiquette), it isn’t really; In the Fade lays all the cards out on the table. Despite applause-worthy grandstanding moments from Katja’s lawyer, the film’s dark and downcast aesthetic — mainly neo-noirish neon and light-and-shadow till the last act — as well as a quick glance at your watch will confirm that justice isn’t going to be done in the courtroom.

That means, too, that its swerve from psychological thriller-cum-courtroom drama to revenge movie — and shift from Hamburg to Greece where the neo-Nazi couple holiday with fellow extremists — is not as jarring as it might be. Katja’s situation has been so consistently desperate that the audience is almost beyond shock; nothing really seems to come ‘out of nowhere’.

Thankfully, writer-director Fatih Akin’s blunting of the more sharp-edged elements of his story have no effect whatsoever on Diane Kruger’s performance which is shockingly good, and deserving of her Best Actress Award win at 2017’s Cannes. Starring in her first German film, bizarrely, Kruger inhabits her role with a naturalness and naturalism that stands out as movingly believable in a drama filled out by some functional characters and in a film that can skew a little bit unbelievable. Her brief exchange, for instance, with one of the attackers’ fathers (Ulrich Tukur) is touching in its flatness; casual human kindness has become as foreign to her as callous racial hatred. 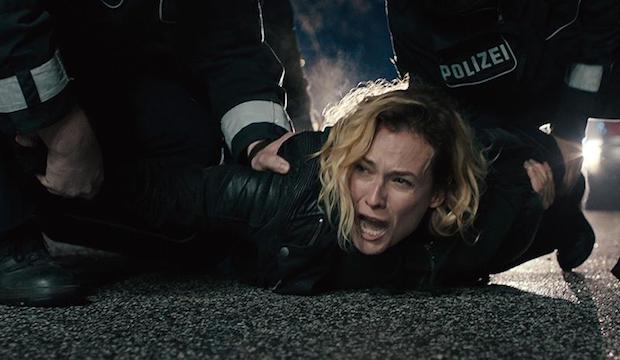 Naturally, given the subject matter of In the Fade, the film can’t help but become a bit of a state-of-the-nation piece — exposing Germany’s awkwardness around its nationalist history — or even, as it takes stock of international extreme right politics, a display of the sign of the times. But you would be hard-pressed not to figure this out yourself from the news. The movie’s biggest reveal, then, is that Kruger is a talent that has languished in the shadows for too long and deserves out of the shade.